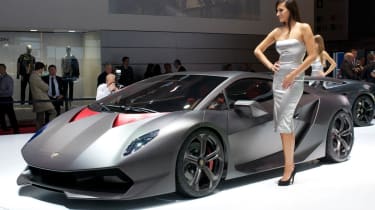 This is the Lamborghini Sesto Elemento. Revealed at the 2010 Paris motor show, it’s not the long-rumoured Murcielago replacement, but a stunning lightweight demonstration of a carbonfibre supercar. And that’s where the rather exotic name stems from: Sesto Elemento translates into English as Sixth Element, representing carbon’s place on the periodic table. The benefits of using carbonfibre are hard to miss – similar in size to a Gallardo (and also all-wheel drive), the Sesto Elemento is far lighter, its 999kg kerb weight just over two thirds that of the 1410kg Gallardo LP560-4’s.

Click here for evo's Lamborghini Sesto Elemento video Using a 562bhp tune of that car’s naturally aspirated V10 engine, it boasts a superbike-style (and Bugatti Veyron beating) 570bhp/ton power-to-weight ratio, enough to secure it an eye-widening 2.5sec dash to 62mph. If proven, that would make it the fastest Lamborghini road car in history. While just a concept for now, it’s said to preview the future of Lamborghini, and comes with a number of patents associated with its technology. It could also be a major hint at the styling of the Gallardo’s replacement, due in two years.

The Sesto Elemento boasts a one-piece monocoque, a tub made of carbonfibre-reinforced plaatic, which its seats are formed into rather than placed upon separately, which would add weight. This means the driving position is tweaked racing car-style, the steering wheel and pedal adjusted rather than the seat. The body panels, wheels, exhaust and suspension components are all carbon, too, the latter not just for weight-saving purposes: it’s a move said to provide a boost to handling, braking and steering accuracy too.

The Lamborghini Sesto Elemento is one of the big draws at Paris. Is it your star of the show, though? Click here to see its competition and make your mind up.

See the Lamborghini Gallardo in action on video