Production of the Lamborghini Gallardo has ended after ten years, with the focus moving the its replacement, the Cabrera. Here are some pictures of the best Gallardo models from the past ten years 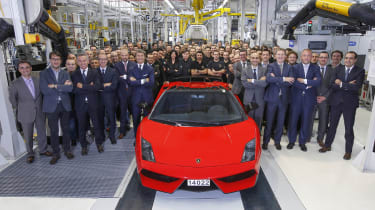 The final model has rolled off the production line – a LP 570-4 Spyder Performante – marking the end of production. Over the last ten years, a total of 14,022 Gallardo have been produced.

Since it was launched, the model has evolved through the years, with a mild facelift and power boost in 2008, and again in 2012. There have been numerous special edition and hardcore versions, such as the Superlegerra and recent Squadra Corse.

Initially only offered with four-wheel drive, 2009 saw the introduction of the limited edition rear-wheel drive Balboni Gallardo. Ever since, the company has offered a rear-drive option due to high demand.

Here’s a gallery of some of the most memorable Gallardos from the past decade: