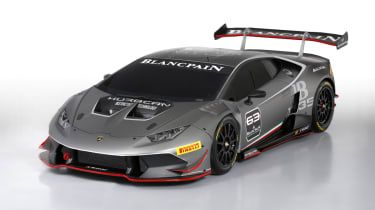 Lamborghini picked The Quail at this year's Monterey Car Week to launch the Huracan LP620-2 Super Trofeo, the race version of its Gallardo-replacing Huracan supercar.

The car will make its race debut in the European, Asian and North American series of the 2015 Lamborghini Blancpain Super Trofeo, but while it shares much of its styling with the road car launched at the 2014 Geneva motor show, it's very much a race car under the skin.

Lamborghini worked with Dallara Engineering and its founder Giampaolo Dallara to develop the Super Trofeo. Dallara and Lamborghini have history as far back as 1963, when Giampaolo himself led development of the Huracan's historical predecessor, the Miura.

The race car's direct-injected 5.2-litre V10 engine is cribbed from the road car, and while it delivers only slightly more power - 612bhp plays 602bhp - the race car's rear-wheel drive layout and heavy use of carbonfibre and aluminium means weight is reduced significantly. The car's roll cage weighs just 43kg and contributes to torsional stiffness 45% greater than that of the Gallardo Super Trofeo.

At 1270kg, 58% of which is over the rear axle, Lamborghini has shed 152kg from the road-going Huracan's dry weight. This has led to an improved power-to-weight ratio, jumping from 423bhp/tonne to 488bhp/tonne.

The rear-drive setup, while beneficial for weight reduction next to the all-wheel drive road car, was also chosen to accelerate the learning process for racers transitioning from the series to international GT racing. Those budding GT drivers shift through a three-disc clutch and an XTrac sequential gearbox, yet a Bosch anti-lock braking system with twelve settings should prevent too many Huracans visiting the barriers during wet race weekends.

The standard Huracan already boasts greater visual aggression than its predecessor but the Super Trofeo takes it another step further - aided by the demonstration car's matte metallic paint finish. Dallara and Lamborghini have worked to improve aerodynamic downforce at the front and rear - and better balance between the two - with front and rear diffusers and a ten-position adjustable rear wing.

'For Dallara Engineering, it has been very rewarding to be involved in the aerodynamic and body development of a high performance car such as the Huracan Super Trofeo,' said Giampaolo Dallara.