Could the new UK-spec STI really live with a Lamborghini? We find out on the rain-lashed roads of Snowdonia 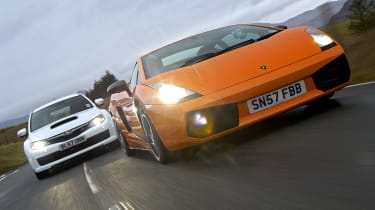 It’s been a long time coming, but finally, after the teaser photos and Tokyo Show debut, Subaru’s radically reinvented Impreza STI has finally landed in the UK.

We’re treating the opinion-splitting all-wheel-drive hatchback to a good old-fashioned evo-style welcome, with a two-day thrash across the relentlessly testing tarmac of North Wales. And to add some spice we’ve also invited the Impreza STI’s ideological enemy: an Italian supercar, in this case the hard-as-nails Lamborghini Gallardo Superleggera.

It’s a mouth-watering meeting cunningly engineered to test that fondly held belief that on the right day, on the right road, and in the right conditions, twenty-five grand’s-worth of plucky all-wheel-drive icon can harass a bona fide member of the automotive aristocracy. It’s a peasants’ revolt the old STI saloon was always more than capable of pulling-off. If the new STI can do the same, it’ll go a long way to appeasing those who question Subaru’s sanity in ditching four doors, a boot and a ruddy-great wing in favour of a dumpy five-door hatchback.