How does the ultimate Gallardo compare to the Subaru? 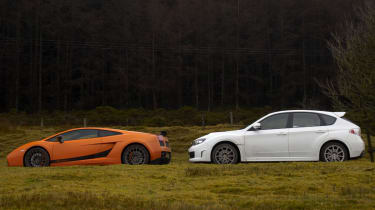 Swapping the Subaru for the Superleggera is as absurd as it is challenging. Everything feels alien, from the reclined driving position and raked windscreen to the weighty steering, fist-tight damping and instantaneous turn-in. The engine noise and brutality of the gearshifts is a sensory assault, the body-slam of acceleration momentarily head-scrambling.

You feel everything through the base of the seat and the structure of the car, from the change in road surface texture and depth of standing water to white lines and the tiniest hint of a camber or crown in the road. Everything feels like it’s working with you. There’s no slack, no mixed messages. Incredibly you find yourself happier to push harder and earlier than you were comfortable to do in the STI. It’s not quite miraculous, but it’s close.

All is fine, until the Superleggera decides to stop talking to you and the once resolutely nailed front-end begins to wash wide of your chosen line, or the normally steadfast tail squirms across a white line under braking. With the ESP system engaged (we never felt the need to even consider switching the system off) losses of grip under power are rare and rapidly dealt with, but the electronics are less sensitive to subtle but potentially serious shifts in lateral grip. One corner in particular seems to wrong-foot the dry-biased Pirellis, the nose pushing smoothly but quickly wide without the ESP system even flickering into life. Such incidents are rare but they leave you seriously spooked, and with the stakes so high, and the margin for error reduced by the sheer physical size of the car, it’s enough to remind you that the Superleggera can bite you, electronic safety net or not. At least the brakes – steel discs on this car rather than the carbon ceramics that have been so snatchy in earlier tests – are easier to modulate.

That frisson of danger is an essential element of the supercar’s core raw appeal, yet there’s particular irony in the fact that the anxiety caused by the STI’s initial aloofness fades once you’ve pushed it hard, while initial confidence in the Gallardo’s abundance of feel and involvement is dented by its sporadic moments of heart-pounding ‘silence’. Fortunately the Lambo has such reserves of performance and such a theatrical delivery that you don’t need to take risks to go quickly. You learn to short-shift to third or fourth gear, then revel in the reach and sustained thrust as the tacho needle sweeps through the crushing mid-range into the keening top-end. Thrilling and absorbing in equal measure, you soon become lost in one of the great driving experiences.

A glance in the mirrors snaps you back to reality though, for there, like an annoying fly that refuses to be swatted, sits the STI, butting through the wall of spray as it shadows the Gallardo’s every move. Sure the Lambo will lunge away from it out of the corners – and down the straights if you’re prepared to ram home the epic straight-line pace advantage – but while you’re busy hauling down the extra speed in preparation for the next corner, and likely as not nervously reacting to the occasional shimmy and slither on white lines or standing water, you just know that the Subaru is still hard on the power, clawing back the distance and using its tighter dimensions to scribe a cleaner, sweeter line through the turns.

It’s a fascinating struggle, whether you’re hunter or hunted, and one that earns massive respect for both cars from Bov and I. There’s no way the Superleggera should be quite this good in such terrible conditions. Nor should it absorb quite so many of the evil lumps and bumps without leaving precious shards of carbonfibre littering the roads of Snowdonia. It’s a mighty car in every respect. But then it’s had to be to stand a chance of fending off the relentlessly capable STI. One of the very few cars we’ve driven that can tackle sodden tarmac at very close to its ultimate dry-road speed, the Subaru is virtually impervious to the rain. While it’s true that its milder manners leave plenty of scope for it to grow into a faster, fiercer car, the new STI Type UK already has what it takes to make a Lamborghini work very hard indeed.