Could the UK-spec Impreza STI live with a Lamborghini? 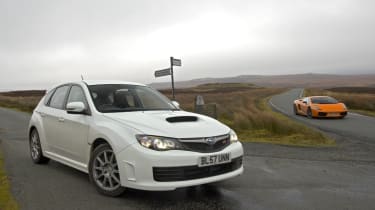 We’ve all grown quite used to – even mildly fatigued by – the idea of a 300bhp saloon, but re-packaging that kind of firepower in a compact, all-wheel-drive hatchback is pretty special. I even like the looks, although it does look under-wheeled on standard 17in rims, as opposed to the optional arch-filling 18-inchers used in the publicity shots.

Fortunately, although the body has changed, one signature feature remains: the big, bad bonnet intake. It’s an unmistakable identifier that combines with the square-shouldered, sculpted wheelarches to give the STI a distinctive and suitably no-nonsense visage. It also gives the Impreza tremendous presence if it powers into your rear view mirror.

Beneath the gaping bonnet vent sits Subaru’s familiar 2.5-litre flat-four. Turbocharged, intercooled and fitted with variable valve timing to deliver 296bhp and 300lb ft of torque, it’s a formidable engine mated to a crisp-shifting six-speed, short-shift manual transmission. Subaru claims a top speed of 155mph, with a 0-60mph time of 4.8sec, which is serious performance for £24,995.

A new feature on the Impreza is Subaru’s SI-Drive, which enables you to shuffle between three different engine settings, which alter throttle response and drivability. There’s also a switch for the centre diff (DCCD) but if you’re anything like me it won’t take you long to decide that it feels best with SI-Drive turned to Sport Sharp (the sportiest setting) and the diff dialled right back in manual mode. There’s also a Vehicle Dynamic Control stability system, which can be fully or partially disabled, or left to its own devices as you wish. It’s not too intrusive, but switching it off allows us to discover just what the chassis is all about.

If the exterior divides opinion, the interior deserves some praise. It feels typically hard-wearing, but there’s a bit more tactility to the cloth and plastics and a little more flair to the detailing. It’s no Audi, but it has a simple, honest ambience that makes you feel immediately comfortable, if a little uninspired. The seats provide good support and the height- and reach-adjustable steering wheel means you can quickly find the correct driving position. Rear space is also decent, so the STI remains as practical as ever.

When we first began organising this test we hoped to experience weather conditions that would give the Subaru at least a sporting chance of staying in touch with the Lamborghini. Predictably, North Wales delivers. As we make our way out of Betws-y-Coed and up onto the exposed mountain and moorland terrain near Penmachno – me in the STI, Jethro Bovingdon in the Superleggera – heavily laden clouds are skimming crazily across leaden skies, drawing an impenetrable grey curtain across what we know to be a panoramic vista of the Snowdonia mountain range. Wind-whipped rain clatters against my driver’s side window like buckshot, while overworked wipers thrash to and fro across a windscreen swamped with water. Ahead, in the midst of the maelstrom, Bov is gunning the Gallardo through the murk, a vibrant slice of citrus orange concealed within a tight comet’s tail of spray.

Chasing a hard-charging Lamborghini as it battles with the finest roads and worst weather is a rare and absorbing spectacle. Though compact by supercar standards, it fills the road from gutter to cats-eye, the occasional percussive kerdug-kerdug as the driver’s side tyres thwack along the centreline audible proof that it’s right on the limit of what’s wieldy around these parts. When stone walls start to line the road you can almost hear Jethro breathe in as oncoming traffic approaches.

I have to say, though, that from my front-row seat in the pursuing STI, this doesn’t seem to be hampering the Lambo’s progress too severely. Sitting a little way back so as to dodge the man-size granite chippings it hoovers off the road, I can’t help but get slightly mesmerised at the sight of this big, fat, super-hardcore machine coping so effectively with the filthy driving conditions. Instead of skittering nervously across the cold, rain-sodden surface, its broad Pirelli P Zero Corsa footwear leaves impressive tracks in the streaming tarmac.

I can see from the Lambo’s body language – and know well from plenty of previous first-hand experience of the Superleggera – that Jethro will be at ease with its responses, happy to trust in the abundant mechanical grip and surprisingly benign balance. It turns without hesitation and with one decisive movement. No need for an exploratory nudge of lock to feel for bite, no mid-corner adjustment or confidence-boosting throttle feather, just turn and go.

It’s a very different but seemingly no less effective process in the STI. Unsurprisingly it’s supple by Superleggera standards, but such is the Subaru’s pliancy that it feels considerably more yielding than the old STI saloon it replaces. This makes for a fluid, if rather soft-edged experience, which means the assorted crests, dips, hummocks and yumps hold no fears. Yet time is needed to build sufficient confidence in the STI’s front end to commit to the roads and the conditions.

The problem – as is often the case with fast Subarus – is steering feel, or rather the lack of. From the first time you turn into a corner you know there’s neither enough weight, or more crucially enough feedback, to piece together an accurate picture of what’s happening at ground zero. Factor-in the slight delay as the car soaks up the lateral loading before reacting wholly to your initial steering input and you’ve got a car that feels woolly and mildly aloof, at least for your first half-hour behind the wheel.

It pays to keep the faith though, for as you begin to feel your way to the limit of the Impreza’s front-end grip as best you can, you discover a friendly, neutral balance, terrific mechanical grip and benign on-limit behaviour. It’s something that was present in early Impreza Turbos and then systematically dialled-out in later STI saloons: that subtle poise and progression traded for a more aggressively responsive front end and a propensity for snappy power understeer then oversteer. Instilling those forgotten values in the new STI certainly makes it a less furious experience but, as we’re fast discovering, it also makes for a more consistent, accurate and exploitable car.

Assured in the knowledge that no nasty handling traits lie on the far side of the leap of faith that it requires you to make, it becomes more and more enjoyable to fully exploit the STI’s tremendous wet-road pace. Despite wearing some pretty ordinary-looking Dunlop SP Sport rubber, it cuts through the standing water incredibly well, and although there’s some initial understeer through slow- and medium-speed corners, once the four-wheel drive gets a chance to dig for traction the STI takes a resolute stance, leaning hard on the outside tyres (especially the rear) and punching through the corner without a hint of wheelspin or scrabble. Seemingly the worse the weather gets, the more impressive is its composure and natural, freely given speed.

On the quicker, smoother and more open sections of our route, the STI flows brilliantly – perhaps not with the searing pace of the Lambo – but fabulously rapidly nonetheless. The tables are turned on the narrow, punishing, nadgety sections between Penmachno and the A5, for where the Lambo has to be driven with a certain degree of caution the STI goes into maximum attack mode. It must look spectacular from the outside as we skip and skim from one yump to the next, but from behind the wheel the Impreza soaks up the punishment, throttled pinned where even the bravest or least mechanically sympathetic Superleggera driver would feel compelled to lift or brake. This is the STI’s true domain and it shows.

The Brembo-made brakes are more than a match for the chassis’ appetite for punishment, delivering excellent stopping power and stamina with modest pedal travel, pleasing linearity and ABS calibration that allows you to get the absolute maximum from the brakes in awful conditions without any clumsy intervention.

Braking deeper into some of the tighter corners on our test route helps bring the tail subtly into play, but a more significant change in cornering attitude comes from a deliberate lift as you turn in.

This gets the tail slipping just enough to get the Impreza sliding all-of-a-piece and take the burden off the front end, while feeding the power in early stops the slide developing and maximises both your corner exit and your enjoyment. It’s nowhere near as sudden a transition as in the STI saloon, nor is it as ragged when you power out of the corner. And while this means the STI hatch can’t be provoked into the same kind of extreme angles, it does mean you can lean on it harder and carry more corner speed.

This smooth, controlled delivery also extends to the engine. Diehards will mourn its lack of aural character, but what it lacks in soul it makes up for in flexibility. Okay, so that’s not necessarily what you’d have been drawn to an old-school STI for, but the strong, steady build in mid-range acceleration is satisfying and highly effective, especially when you prefer to hold third or fourth gear. Where the 2.5-litre engine is found wanting is when the revs get to 6000rpm, for rather than pulling with ever-increasing enthusiasm, the motor simply loses interest, gradually petering out in disappointingly flaccid style at just under 7K. It’s all a bit too sensible for an STI and a far cry from the fizzy, high-revving delivery of a 2-litre Japanese-market Spec-C engine, which screams to 8000rpm and beyond.

The STI is one of the very few cars we’ve driven that can tackle sodden tarmac at very close to its ultimate dry-road speed. While it’s true that its milder manners leave plenty of scope for it to grow into a faster, fiercer car, the new STI Type UK already has what it takes to make a Lamborghini work very hard indeed.