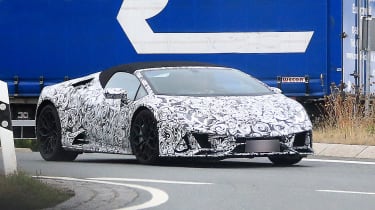 Lamborghini has been spotted testing a facelifted version of the Huracan. Although this is a Spyder, we expect that the Coupe will get the same treatment, along with changes under the skin to keep it fresh in the face of competition from rivals like the McLaren 720S and Ferrari 488 GTB.

Look carefully at the images, and you’ll note the bumper’s more elaborate design compared to the current Huracan LP610-4 models, taking inspiration from both the hardcore Huracan Performante and the recently driven Aventador SVJ. The biggest change appears to be at the rear, where the high-mounted exhaust outlets sit in the same position as on the Performante.

> Click here for our review of the Aventador SVJ

A small lip spoiler has also been integrated by the looks of things, possibly incorporating a more subtle version of Lamborghini’s ALA active aero tech borrowed from its more hardcore siblings.

It is expected that the interior will also get a decent overhaul, the centre console possibly due to receive a new infotainment system in addition to the current car’s Audi-derived digital dial pack. Currently, the Huracan only has a tiny central screen dedicated to three small dials, but we expect this model to now integrate a portrait orientated screen replacing physical buttons that control the infotainment and driver modes.

Details of any mechanical changes are unknown at this point, but we suspect that the same naturally aspirated 5.2-litre V10 engine will be used, albeit upgraded to not only comply with the latest emissions regulations, but also produce more power. In addition, rumours are circulating of the revised Huracan picking up a 48V mild hybrid system, as well as rear-wheel steering derived from the Aventador S, but this is still little more than speculation as Lamborghini has not made any comment on the matter.

The current Huracan may lack the outright firepower of turbocharged rivals, but with a sonorous V10 belching out all sorts of wonderful tunes, the Huracan remains a distinctive and rare entity in the supercar class. Only the Audi R8, which shares the same engine, can match it on the noise front.