Spectacular to look at and enormously quick, but far from the best model in the Huracan range 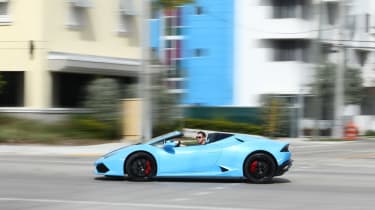 The high-revving, normally-aspirated V10 is carried over from the LP610-4 coupe. It’s also the same unit that powers the Audi R8 V10+ – in an age of widespread downsizing and turbocharging this is one of the great modern performance car engines.

Peak power is 603bhp, arriving at 8250rpm, while the maximum torque output of 413lb ft is available from 6500rpm. Power is distributed to all four wheels via a seven-speed twin clutch gearbox. 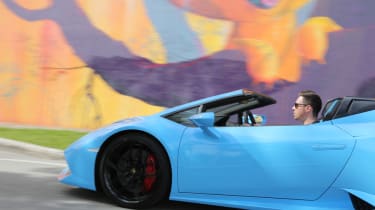 The roof mechanism and additional structural bracing add 120kg to the weight of the car, taking the total dry weight to 1542kg. Nonetheless, the Spyder will still reach 62mph in 3.4 seconds and power on to 201mph.

The Huracán is built around an ultra-stiff aluminium and carbonfibre chassis. Removing the roof does, of course, compromise structural integrity, but with such a rigid starting point the engineers have been able to maintain a good level of torsional stiffness – in fact, the Huracán Spyder is 40 per cent stiffer than the Gallardo Spyder.

The roof itself is a three-layer fabric item, which can be raised or lowered in 17 seconds at speeds up to 31mph. Lamborghini claims the roof suppresses wind noise almost as effectively as the coupe’s fixed roof. A pair of deployable roll over bars is hidden beneath the deck to protect occupants in the event of roll.

A great deal of work has gone into managing the air-flow around the cabin in order to improve comfort and refinement when the roof is down. A number of fins and vents divert air and release pressure, but Lamborghini decided against an unsightly spoiler or windbreak on the header rail.

The four-wheel drive system can split torque infinitely between the front and rear axles, while a limited slip differential distributes drive between the rear wheels. 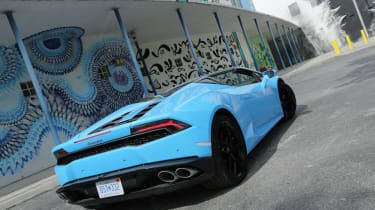 Carbon ceramic brakes are standard fit, while dynamic steering and adaptive dampers are both optional extras.

As the first of the 2016 model year Huracáns the Spyder introduces a ‘cylinder on demand’ function, which shuts off one bank of cylinders when cruising to reduce fuel consumption.

The roof mechanism is located ahead of the firewall and it impinges on cabin space. In fact, at six-foot tall I found I couldn’t get the driver’s seat as far back as I’d have liked. I usually extend the steering wheel out as far as possible in every car I drive, but in the Spyder I only had it at half extension because of how far forward I was having to sit.

The seat itself is both set too high, which means I was short on headroom when the roof was in position, and slightly uncomfortable over longer journeys. Taller drivers would be well advised to try out the seating position before committing to a Spyder purchase.

The cabin itself is an evocative place to sit and the TFT cockpit display within the instrument binnacle does work well once you’ve familiarised yourself with it, but some of the minor controls feel cheap and tacky.

As Lamborghini courts the lifestyle supercar buyer it finds itself in a challenging position – over the years the brand has traded on its raw and aggressive image, but it’s precisely that image that has been putting off a large number of non-enthusiast buyers. Lamborghini is at pains to point out that its latest V10 models are neither intimidating nor difficult to drive.

That’s had very significant consequences for the way in which the Spyder behaves on the road. In the basic Strada mode the car is very well mannered around town with a subdued exhaust note, a reasonably pliant ride, light steering and a refined gearshift strategy while the cabin remains calm and quiet enough at speed with the roof down for the driver and passenger to hold a conversation. 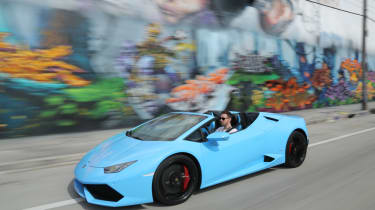 On the open road the Spyder majors on grip, security and stability rather than on-the-limit thrills. It feels very agile and responsive on the way into corners with taut body control, but there’s nothing other than gentle understeer when you start to work the chassis harder and never any sense of the car being driven from the rear. The R8, which shares the Huracán’s hardware, is a much more engaging car to drive.

The engine is a joy, though, with massive performance, razor sharp throttle response and a spine-tingling soundtrack in the Sport and Corsa modes, while the twin-clutch gearbox works smoothly around town and quickly and cleanly in manual mode. The gearshift paddles, incidentally, are mounted on the steering column, whereas the R8 locates them on the steering wheel itself.

Over bumps and broken surfaces there is a sense of the structure flexing – you can feel the steering column shudder slightly and see the rear view mirror shake – but the Huracan Spyder is a huge improvement over the Gallardo Spyder in this regard. Only the McLaren 650S, with its carbonfibre monocoque chassis, feels significantly stiffer than the Lamborghini.

Dynamic steering remains a point of frustration. The way in which it changes ratio and adds and removes assistance depending on speeds and drive modes is irritating and it prevents you from steering the car intuitively and instinctively. 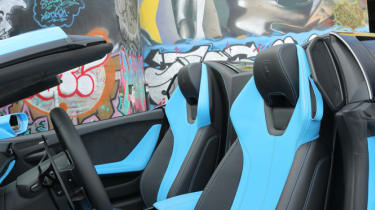 The Huracán Spyder is the only normally-aspirated car in its class – at least until the R8 Spyder arrives – which is massive a bonus for a drop-top supercar. The Ferrari 488 Spider and McLaren 650S Spider are both more engaging cars to drive around the limit, though.

The UK price for the Lamborghini Huracan Spyder is yet to be confirmed, but expect to pay in the region of £172,000. 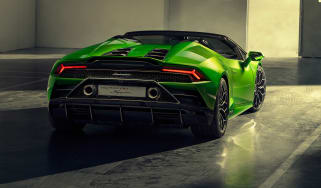 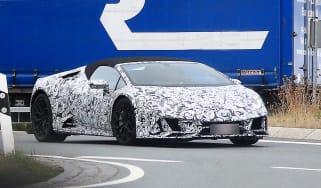