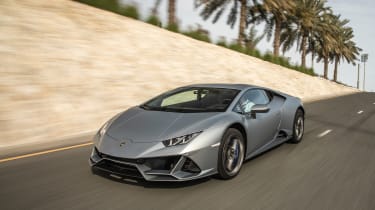 With a more powerful engine from the current Huracán Performante, the latest chassis technology from the Aventador S and SVJ and a focus on aerodynamics that deliver as much additional downforce as they do enhance the driving thrills, the new Huracán Evo sounds too good to be true, doesn’t it?

But Lamborghini is confident about the Evo (great name, by the way…), the model that replaces the current four-wheel-drive coupe but which will be sold alongside the Performante and existing rear-drive entry-level model. With Ferrari’s sublime 488 GTB and McLaren’s 720S – a former eCoty champion no less – targeted as direct rivals the Huracán Evo needs to add up to more than the sum of its parts.

> The 10 best supercars on sale today

Two key areas stand out when it comes to the Huracán Evo’s development: its new technology-laden aluminium and carbonfibre chassis, and its aerodynamics. The former is focused around what Lamborghini calls LDVI (Lamborghini Dynamic Vehicle Integration), essentially the car’s single central electronic brain that monitors and controls every dynamic function within the car’s chassis. Traction control, the four-wheel-drive system and the new four-wheel steering, developed from the components in the Aventador S, and a new torque-vectoring system are the four key elements LDVI monitors and reacts accordingly to. 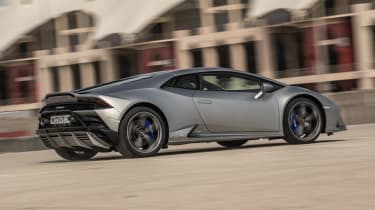 It’s a system that Lamborghini claims is ‘Feed Forward’, a predictive system that within 20 milliseconds monitors your throttle, gear change, steering and braking – if any – input and the level of grip available before predicting what’s required of the aforementioned chassis components.

Key to the new Huracán Evo’s chassis is the four-wheel steering system. Controlled by the LDVI (a system wholly developed by Lamborghini, for Lamborghini and not heading anywhere near Ingolstadt soon) results in the front and rear-axle ratios being developed as one rather than individually, therefore allowing Lamborghini’s engineers to eliminate the sensation often felt with cars equipped with four-wheel steering that after the initial turn-in phase the rear axle feels like it is responding a split-second later, which many can find either distracting or disconcerting, or a combination of the two. Lamborghini’s system works as one, with the front and rear axle reacting in unison. There’s up to three degrees plus or minus of turn available on the rear axle, with 10 degrees of steering input on the front axe equating to one per cent across the rear. In order to incorporate the rear-wheel-steering technology only Lamborghini’s often maligned dynamic steering is available with the Huracán Evo.

Away from the electronic hardware Lamborghini has also worked hard on optimising the Huracán’s aerodynamics. While it hasn’t gone as far as it did with the Performante, the Evo increases downforce by a factor of seven over its predecessor while also reducing drag.

There’s a new front splitter with an integrated front wing that’s suspended within, improving the airflow through, over and under the car. Within this new bumper is a pair of air curtains to funnel air through and out of the front wheel arches, reducing turbulence as it exits before being channelled into the rear engine intakes ahead of the rear wheels.

The aero evolution doesn’t end there, because there’s a new rear slotted spoiler that allows the upper section to create additional downforce, with the middle section creating a venturi effect to accelerate the air through. These are combined with a more aggressive rear diffuser and an underfloor that’s been further optimised for airflow. 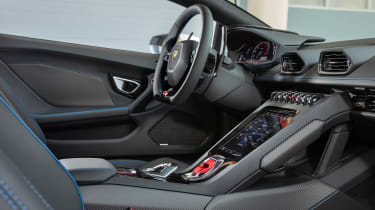 Lifted wholesale from the Huracán Performante, the new Huracán Evo’s 5.2-litre V10 produces 631bhp and 629lb ft, cracks the 60mph sprint benchmark in 2.9sec, and takes a further 6.1sec to reach 120mph. With the same titanium valves and standard sports exhaust system the only changes are to the Huracán Evo’s ECU.

Drive to all four corners is via a seven-speed double-clutch gearbox, with the torque split between front and rear axles further enhanced, allowing 100 per cent of the drive to be sent to the rear more of the time, the front Pirellis only taking on their share of the drive when required. 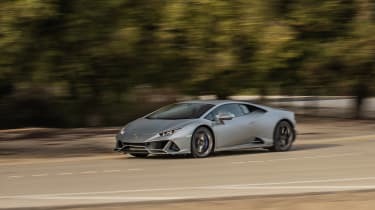 Caveat alert: we only drove the Huracán Evo on track at the Bahrain International Circuit, a great venue to extend that glorious-sounding and intoxicating V10. Less so if you wish to deliver a definitive dynamic verdict, but that will come by March.

On track, in Sport and Corsa driving modes the Huracán Evo is not so much a step up from the Huracán it replaces, but a quantum leap. It comes down to the confidence the car and its new systems instil in you. The dynamic steering still lacks any feel, but it’s precise and direct and combined with the rear-wheel steering its willingness and desire to get its nose to the heart of any corner without the need for constant corrections is unlike any Huracán that has gone before, Performante included.

You can carry so much more speed into a corner. Where the original Huracán would start to ask awkward questions of the front Pirellis, in the Evo the process is a single linear movement, the chassis pivoting around your hips rather than possessing that sensation of the front and rear axles’ only connection being that they are covered by the same body. 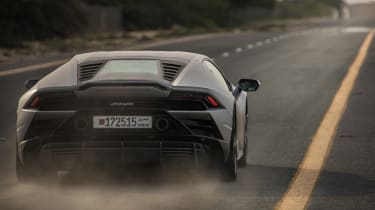 That direct link between front and rear via the LDVI technology eliminates any delay and it’s a considerable contributing factor as to why the Huracán Evo feels so agile and involving. Through a slow-speed slalom or a fourth-gear left-right downhill sequence the Evo doesn’t want to get away from you like Huracáns of old did. Dive into the apex and once the front is where you want it to be that musical (so much more so than the previous car thanks to the Performante’s exhaust system), muscular and oh-so-divine V10 can be called upon to summon every one of its 631bhp as the torque-vectoring and four-wheel drive shuffles away imperceptibly in the background to catapult you down the next straight.

Sound a bit clever for a Lamborghini? Don’t worry, it will still play and bite if you want it to. In Sport mode – the middle of the two settings – the slip angles are generous enough to allow you to move the car around, through and out of the corner without you having to take liberties to instigate it. 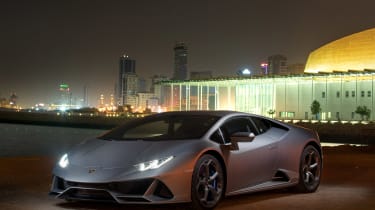 And the extra downforce? Surely on a track it plays a significant part? Well yes, it does. Through the ultra-high-speed stuff it feels so planted, so sure of itself that you need to rethink what Lamborghini’s baby supercar is capable of. Should you ignore the brake board put out for the idiots and ask the ceramics to stop you from 160mph at the 150-metre board you’ll notice less pitch and less of a sensation of the rear trying to rise up and beat the nose to the corner.

It’s quite a device, the new Lamborghini Huracán Evo. More precise, more agile, more involving and engaging than the car it replaces. It’s not Performante-quick. Some of this is down to the additional 40kg it carries, the rest because it doesn’t have that car’s devilish aerodynamic set-up, but it is no less exciting or rewarding. On track at least…

And now comes the bad news. The Lamborghini costs £206,000 on the road, which might come as a bit of a shock if you have always considered a Huracán to be an Audi R8 or McLaren 570S rival. At this starting price Lamborghini has driven up to Ferrari and McLaren’s respective showrooms and asked the 488 and 720S to step outside. Now that’s brave.