Lamborghini Huracan Performante review - Is 'Ring king as impressive as the numbers suggest?

If the McLaren 720S doesn’t quite hit the spot, you need one of these 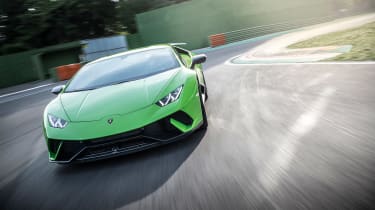 Nothing so perfunctory or, indeed, unwanted in an increasingly ‘…cake and eat it’ sector. As long as you don’t option the desperately uncomfortable fixed-back bucket seats, the Performante is just as habitable and comprehensively equipped as the regular LP610-4 on which it’s based. Yes, it is more powerful (plus 29bhp equals 631bhp) and it is lighter (by 40kg) but the clever bit really is the clever bit: ‘Aerodinamica Lamborghini Attiva’ or ALA for short. More on this remarkable active aero system in a moment.

Star of the regular Huracan is its 5.2-litre, naturally aspirated V10 powertrain. Good news on two counts: it’s even more engagingly violent here and has never been as completely exercised by a road-going Lambo’s chassis and aero. The power hike comes from a new intake manifold, a lighter and repositioned exhaust system and new titanium valves with more lift. The upshot is 631bhp at 8000rpm and 443lb ft of torque at 6500rpm, though some 70 per cent of that is available from just above idle. 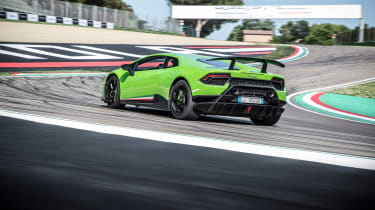 Helped by the rear-biased all-wheel drive, the  active aero’s drag-reducing adaptation in a straight line and faster full-throttle  Corsa-mode reflexes for the 7-speed LDF dual-clutch transmission, 0-62mph is over in just 2.9sec, putting the Performante in with some very expensive sub-3 company. But if you really want to know how fast this car is, the 0-124mph claim of 8.9sec perhaps paints a more graphic picture.

ALA, no question. It consists of a forged composite front spoiler with active flaps on the top surface in conjunction with two ducts on the rear engine cover that are connected to the inner channels of the rear wing. When the flaps are closed, the rear wing acts just like a traditional spoiler, providing vertical downforce, but when they’re open air is channelled through ridges underneath the wing to reduce drag and maximise acceleration. Neat enough. But the ducts also operate independently, allowing what Lamborghini calls ‘aero vectoring’ to make fast cornering even faster by delivering bespoke downforce  on either side when and where it’s needed. Said it was clever. 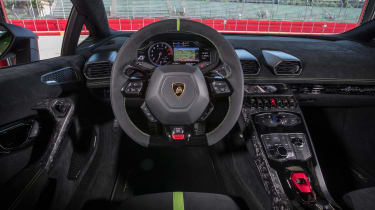 Interestingly, ALA also contributes to the weight saving.  The front spoiler, rear wing, engine cover and rear diffuser are all made of forged composites. They’re oddly decorative (think high-end kitchen worktop) but it’s just how chopped carbon fibres embedded in a matrix of resins look.  Unsurprisingly, the Performante gets a stiffer suspension setup than the standard Huracan that’s 10 per cent stiffer vertically and 15 per cent stiffer in roll. Also the steering has been re-calibrated for sharper turn-in. The fabulous-looking 20-inch alloys wear Pirelli P Zero Corsas but the Nurburgring record was set on Trofeo R tyres which are available as an option.

Seriously fast, focused and exciting meets extraordinarily biddable and forgiving. It’s a notionally perfect broad spectrum of assets for a supercar, and the elements merge so seamlessly, an experience that initially threatens to overwhelm quickly becomes immersive and stubbornly addictive - especially if you have an empty Imola race circuit near Bologna in Italy to feed the need.

Almost as hard to grasp as that ‘Ring lap time is what feels finally like a complete realisation of the Huracan’s seemingly forever elusive potential. It’s a transformation that combines a shattering  race-fit soundtrack only a few decibel’s shy of the Huracan GT3 racer’s with searing, inexhaustible straight-line push; the replacement of the standard car’s feel-less helm and edge-of-understeer balance with precision, physicality and turn-in acuity that can nail an apex with true aggression or brush it with finely wrought finesse; serious high speed stability and grip that eases down into playful throttle-induced or trail-braked oversteer held within beautifully judged limits by the traction and stability electronics. 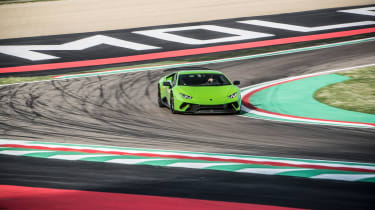 You get the impression that Lamborghini hasn’t tried to reinvent the supercar with the Huracan Performante, just make a better Lamborghini.  It’s succeeded.

Whether McLaren’s new, almost identically-priced 720S proves to be even faster round a long squiggly loop in the countryside remains to be seen if McLaren is curious enough to find out. For sure, it offers an intriguingly alternative – relatively subdued aesthetic and aural - approach. At around half the price of either, though, perhaps the latest Porsche 911 GT3 is impossible to resist when it comes to pure driving joy. It’s shaping up to be an incredible year.