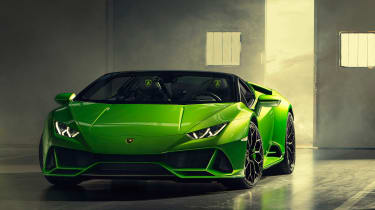 Lamborghini has wasted no time following up its new Huracán Evo supercar with the obligatory soft-top Spyder version. Set to be revealed to the public at the Geneva motor show next week, the Spyder is aiming to offer the same heavily revised chassis tuning and stirring naturally aspirated V10 engine but in an open-topped body.

If you’ve read our review of the new Huracán Evo, you’ll know that Lamborghini has done an impressive job of transforming the previous Huracán’s somewhat inert handling. The result is a supercar that’s truly able to rival class leaders such as the Ferrari 488 and McLaren 720S Spiders. The feat has been achieved via both hardware and software upgrades - the hardware tweaks notably including the adoption of the rear-wheel steering system from the Aventador S.

> Click here for our review of the Huracán Evo Coupe

As in the Huracán coupe, all of the Spyder’s dynamic chassis components, like the dynamic steering system, adaptive dampers and various other driver aids, are now controlled by a central ECU. Called Lamborghini Dinamica Veicolo Integrata (or LVDI for short), the system not only adjusts these dynamic elements actively but also proactively - using road, driver and vehicle data amassed from multiple sensors throughout the car. 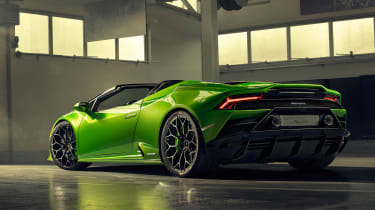 It’s all techy stuff, but does it actually work? Well, yes, it does, as proven by the coupe’s thrilling dynamic abilities revealed at its launch a few months ago.

This new Spyder should fare just as well, too. Its carbonfibre monocoque chassis means little compromise in terms of stiffness as a result of the fixed roof being sheared off and little penalty with regards to weight gain, aside from the small added mass of the folding roof and its mechanism. Lamborghini quotes the Huracán Evo Spyder’s weight as 1542kg ‘dry’, which is a reasonable 120kg up on the coupe.

The powertrain in the Huracán Spyder is as in the Huracán coupe, which means it carries across the same brilliant 5.2-litre naturally aspirated V10 engine with 631bhp produced right up at 6500rpm. Power is sent via the same whip-snap seven-speed dual-clutch transmission to all four wheels, accelerating the Spyder to 62mph in just 3.1sec - only 0.2sec behind the coupe. 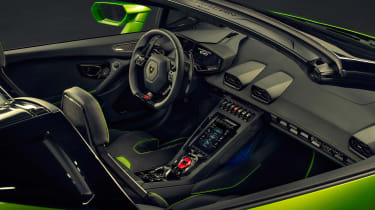 Styling and interior changes are as per the coupe, too, with subtle exterior alterations designed to improve the Huracán’s aero balance at speed. The interior is also lifted from the hard-top car, centred around a new portrait-oriented touchscreen in the centre console that controls all of the car’s main functions. The fabric roof is able to raise and lower at up to 30mph in 17sec, significantly faster than the folding hard-top units seen in rival drop-top supercars from McLaren and Ferrari.

The Huracán Evo Spyder will reach customers this spring, with prices in the UK starting at £218,137 before options, around £20k less than the more powerful McLaren 720S Spider, and within £1000 of the Ferrari 488 Spider.