Updated with video. Stunning convertible is 40 per cent stiffer than the Gallardo Spyder 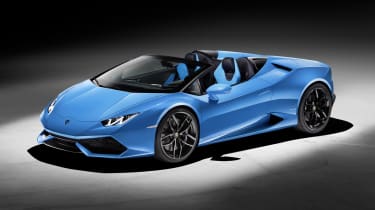 Lamborghini has launched its latest take on the Huracan at the Volkswagen Group’s traditional preview night, before the Frankfurt show opens its doors on Tuesday.

The car will be a natural progression of the Gallardo Spider – a car that became Lamborghini’s best-selling open-top model during its long production run. The new car, says Lamborghini president and CEO, Stephan Winkelmann, should ‘exceed its predecessor in every way’.

The V10’s output is fed through a seven-speed dual-clutch transmission and at the rear, a locking differential. Power can be attributed between the axles according to the car’s dynamic needs.

The result is a 0-62mph sprint of 3.4sec – two tenths shy of the fixed-roof car – 0-124mph in 10.2sec and a top speed of 201mph, just 1mph behind. The engine also features cylinder on demand technology, allowing it to shut down one cylinder bank under light load, facilitating combined economy of 23mpg. 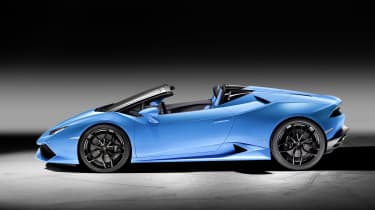 A 43/57 front/rear weight distribution – the same as the coupe – should ensure the Spyder’s handling is similar, though a dry weight of 1542kg means the Spyder is 122kg heavier than its closed-roof counterpart. Lamborghini still offers Lamborghini Dynamic Steering as an option – one we’d ignore, since the standard steering feels so much more natural.

More positively, the Gallardo’s aluminium and carbonfibre structure is 40 per cent stiffer than that of the old Gallardo Spyder. The Huracan also develops 50 per cent more downforce than its predecessor. Stopping is handled by standard-fit carbon-ceramic brakes, with 380mm discts at the front.

The greatest change from the coupe is of course the new soft top. When the roof is up, Lamborghini extols the car’s low drag coefficient and resulting low noise; when it’s down – the process of 17 seconds of electrohydraulics – two movable fins rise from the roof casing give the rear deck an entirely new look. 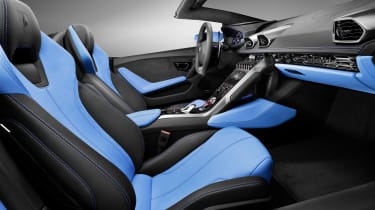 Lamborghini hasn’t confirmed UK pricing yet, but in Europe the Huracán LP 610-4 Spyder will start at 186,450 Euros plus local taxes. Deliveries begin Spring 2016.