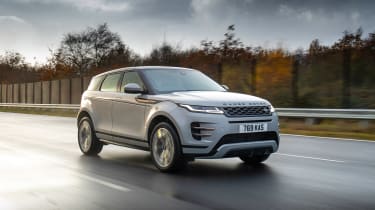 Land Rover has revealed a new plug-in hybrid powertrain that will be found in both the Range Rover Evoque and Discovery Sport. Both of these models have been completely redesigned in the last 24 months, but had so far only been available with a range of four-cylinder petrol and diesel Ingenium engines. This new P300e plug-in powertrain addresses both the desire for more efficient engines from customers, as well as usefully bringing down Land Rover’s fleet CO2 average.

The new powertrain is made up from a new 197bhp turbocharged three-cylinder petrol engine paired with a 108bhp electric motor that’s mounted on the rear axle. The new Ingenium three-cylinder is of the same modular family as the four- and six-cylinder versions found in other JLR products. Like (most of) them, it features an integrated starter motor and generator, and an exhaust manifold integrated into the cylinder head, improving thermal efficiency and response from the turbo.

Peak power is rated at 304bhp, with 398lb ft of torque available, making the new plug-in the most powerful version of both on sale. It’s also the fastest of each, reaching 62mph in 6.4sec (0.2sec faster than the Evoque P300). Unlike Land Rover’s traditional mechanically linked all-wheel-drive system found in most variants, power in these P300e models is sent from each of the power units to their relevant axles only, with no mechanical connection between the axles. The transmission is also new, this time an eight-speed torque-converter unit rather than the nine-speed.

MPG figures for these types of plug-in hybrid models must always be taken with a grain of salt, but even under the more stringent WLTP the Evoque is rated at 201mpg, with a CO2 output of just 32g/km. The slightly heavier Discovery Sport is only slightly less efficient at 175mpg and 36g/km, but using the smaller and lighter plug-in BMW X1 25e as a comparison, its comparative 157mpg and 43g/km make Land Rover’s efforts look impressive. 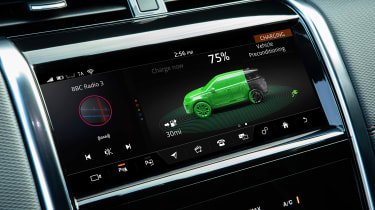 Of course, to get anywhere near those consumption figures, the 15kWh lithium-ion battery pack will need to be fully charged (it can be 80 per cent replenished from a 7kW domestic wall-mounted home charger in just under an hour and a half). Evoque P300e models are able to travel up to 41 miles purely on electric power (Disco Sport maxes at 38 miles), reaching a top speed of 84mph. As with all plug-in hybrids there is a weight penalty, here equating to a 230kg addition over an equivalent petrol model. Standard Evoque and Discovery Sport models aren’t known for lithe kerb weights either, making these two near-2.2-ton compact SUVs.

There are three main drive modes within the usual terrain response system, including a standard hybrid mode, EV and a battery save mode to maintain charge of the batteries. Both Evoque and Discovery Sport models are otherwise identical to their range siblings, with only the second fuel-filler cap on the outside hinting at the powertrain underneath.