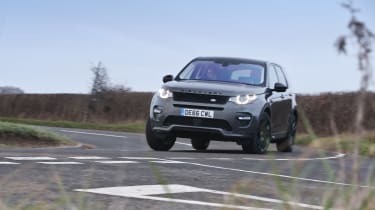 Rather surprisingly, the automatic version of the top-end Discovery Sport is one second faster in the 0-60mph sprint, taking 8.9 seconds according to Land Rover - to the manual model's 9.9-second time. That's despite a 10kg weight penalty (1884kg for the auto vs. 1874kg for the manual in HSE Luxury trim), but is no doubt thanks to the more advantageous gearing afforded by the nine-speed auto.

The new 2.0-litre turbodiesel engine is far more hushed than its 2.2-litre predecessor in the Freelander, whose gruff note discouraged you from heading towards the upper reaches of the rev range. To be fair, the new engine is hardly a screamer either, so you're better off exploring the engine's healthy 317lb ft of torque developed at 1750rpm, and not venturing much beyond around 3000rpm. It feels strong and willing across that band, with a keen response to prods on the accelerator. 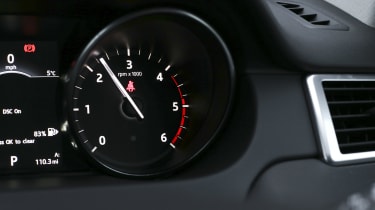 The nine-speed automatic is smooth, but far from perfect. In most driving, its ability to shuffle quickly to higher ratios keeps noise low and economy high, but with nine gears to choose from any sudden demand for performance leaves it hunting for the correct gear. At this point, it'll invariably choose a gear lower than is really necessary, resulting in more noise than performance. Select Sport mode from the rotary gear selector and things improve - the electronics tend to keep the car as close to the 1750rpm torque peak as possible - though expect economy to suffer with the increased revs.

Of course, that low down torque comes in particularly useful if you're one of the few that plan on exploring the Discovery Sport's off-road performance. Most won't know or care whether a 25-degree approach angle, a 21-degree ramp angle and a 31-degree departure angle are any good (they are), but an unlucky flood-enduring few will appreciate its exceptional 600mm wading depth. Likewise, the Terrain Response system is something few will ever change out of 'default' mode, but when challenged it proves highly effective at keeping the car moving, in situations where many others would have to abandon ship.