Land Rover has revealed the new Discovery Sport, a smaller and more stylish model to sit below the Discovery 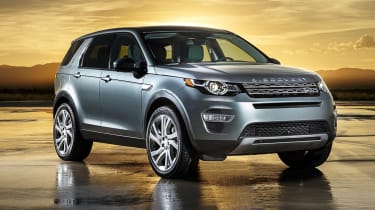 Welcome to the future of Land Rover’s Discovery Range. No longer confined to just a single model, this smaller and more stylish Discovery Sport will slot below the full-fat model in much the same way as the Range Rover Sport does for its flagship larger brother.

From the January launch, there will be a single engine option – the 2.2-litre SD4 diesel – that produces 187bhp. This can either be specified with a six-speed manual, or the nine-speed ZF automatic gearbox. Initially, only four-wheel drive will be available, however Land Rover says that later in 2015 a front-drive option will become available, as well as a much more economical eD4 engine.

A new multi-link suspension set-up at the rear plays a major part in the new car’s clever packaging. Not only is it said to bring much improved on road stability and class-leading axle articulation for off-roading, but also much less intrusion into the cabin. With a ‘five plus two’ seating arrangement, it still means that there’s space for seven occupants, although the rearward-facing seats are best suited for small children.

With Jaguar Land Rover so committed to the widespread use of aluminium throughout the range, the Sport naturally contains a high proportion of the lightweight material. The bodyshell is largely aluminium, strengthened with high-tensile steel in key areas, while many of the suspension components are also alloy, reducing unsprung weight.

There’s a high-level of standard equipment and technology too. Being a Land Rover, it’s primary function is still to do the all-terrain driving better than anything else, and with Hill Descent Control, Gradient Release Control, Roll Stability Control amongst others, it has a massive arsenal of systems to keep you safe. Inside feels very much in keeping with the Range Rover Sport, although the Discovery still retains a set of conventional dials, opting for a single large eight-inch central screen.

With a starting price of £32,395, the in the UK, the Discovery Sport will go on sale next January, along side the current generation Discovery, with top-spec HSE Lux models topping out at £42,995.