Built on the same platform as the Evoque, Land Rover's Freelander replacement gets the firm's latest design language 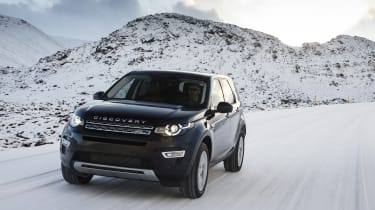 As such, the Disco Sport lacks the transfer ’box of more serious Land Rover products. It’s more of an Evoque-plus than a sporty Disco, then, but it's undeniably a natural fit for an evolving Land Rover line-up in an SUV-orientated world.

New four-cylinder petrol and diesel engines are due in 2015 but, at launch, there’s just an evolved version of the Ford/PSA 2.2-litre oil-burner Land Rover has been using for years, with 187bhp and 310lb ft of torque. All four wheels are driven via a nine-speed ZF auto with paddles or, if you’d prefer to stir a stick, a six-speed manual.

Manual models are a little more frugal than their automatic equivalents, at 46.3mpg to 44.8mpg, but the auto counters with a 0-62mph sprint 1.5 seconds quicker, at 8.9sec. Top speed is 117mph across the board. The Discovery Sport's figures are just a little shy of those possible in the equivalent Evoque – on account of bulkier kerb weights. 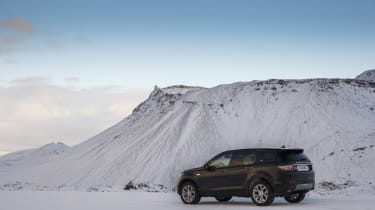 By making some bodywork components from aluminium – principally the bonnet, roof and tailgate – Land Rover has also made the Disco Sport 24kg lighter than the outgoing Freelander, despite the inclusion of a pedestrian impact bonnet airbag, which helps the new car earn a five-star Euro NCAP crash-test rating.

The cabin is smart and practical rather than plush and finely detailed, although some of the trim materials fall short of what you’d find in the more expensive Evoque (or Audi, BMW and Lexus, come to that). Also, some rougher sections of the route excited a worrying melange of squeaks and rattles from the rear and dash on our test car – all the more annoying given the generally excellent levels of acoustic refinement. It’s a reflection, too, of the suspension’s reluctance to soak up bumps and ruts, though bigger undulations reveal a better primary ride with well-judged damping.

Any other serious judgements about the Sport’s performance and chassis dynamics will have to wait until we get hold of one in the UK, as after the freezing, snowy wastes of Iceland the only abiding impressions are of the automatic transmission’s smoothness and slick compatibility with the torquey diesel, and, with studded tyres, a general surefootedness that seemed no better than local front-drive hatchbacks on similar rubber.

At no point were suspension loadings anything more than moderate but, maybe thanks to the sophisticated traction electronics, driving on compacted snow and ice never felt nervy, with the steering and general balance engendering plenty of confidence within the reduced limits. Plenty of promise, then, but more realistic challenges lie ahead. 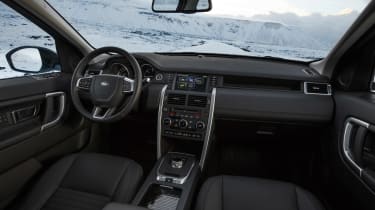 Entry-level SE trim gets you air con, heated seats and windscreen, rear parking sensors and an eight-inch touchscreen, while range-topping HSE Luxury kit includes air-conditioned seats, premium leather upholstery, heated rear seats and a full suite of InControl apps that, among other things, perpetuate the vogue of connecting cars to smartphone apps and includes (rather dubiously given the Sport has its own less fiddly system) a satnav function.

The considerable effort expended packaging three rows of seats in a car more compact than five-seater rivals has paid off. The extra accommodation hasn’t simply been shoehorned in, either. Helpfully, the middle-row seats are on runners and can be slid fore and aft by up to 160mm to best utilise the available legroom. And the so-called ‘stadium’ configuration puts each trailing row a little higher than the one in front to aid passengers’ views out