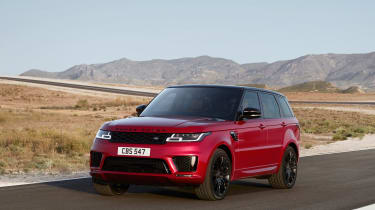 Jaguar Land Rover has released the first details and accompanying images of the 2018MY Range Rover Sport. The new range includes not only a revamped SVR model with more power, but also JLR’s first plug-in hybrid model, the Range Rover Sport P400e.

Given JLR’s stated ambition with regards to electrification, the P400e is clearly an important step for the firm. It’s powered by a longitudinally mounted 2-litre Ingenium turbocharged petrol engine combined with a 85kW electric motor. The combustion engine is good for 296bhp alone, and the total system outputs are 399bhp and 472lb ft of torque. Predictably emissions and economy figures are impressive, at least using the official method of measurement, standing at 64g/km and 101mpg.

The P400e’s 13kwh lithium-ion battery, mounted under the boot floor, is enough to provide a 31-mile electric-only range. There are two driving modes: a default Parallel Hybrid setting that best combines the two power sources, and an all-electric EV mode. In addition, the driver can choose a SAVE setting, which prevents the battery charge level falling below a set point, and a Predictive Energy Optimisation function, where GPS altitude data optimises the power source usage by taking into account the gradient of the road. 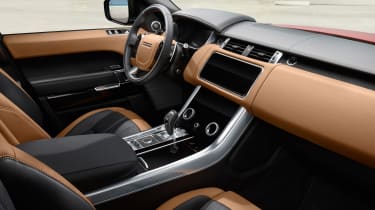 The vehicle’s battery can be completely charged in two-and three-quarter hours using a 32amp rapid charger, or a rather more leisurely seven-and-a-half hours using the standard 10amp charging cable. Predictably, the P400e is also the heaviest Sport in the range at 2471kg, compared to 2083kg for a Sport powered solely by the new 296bhp Ingenium petrol engine. However, it is only slightly heavier than the TDV8 variant, which weighs a chunky 2443kg according to JLR’s scales. The P400e replaces the old SDV6 hybrid diesel model, and the new range also includes a revised 5-litre supercharged V8 petrol variant with peak power up from 503bhp to 518bhp. Gearboxes are once again eight-speed automatics, but there’s a new transfer case for the all-wheel drive system with a so-called ‘smart actuator’ rather than the old separate motor and ecu.

As for the SVR, that’s now powered by a 567bhp version of the venerable supercharged V8 (up from 543bhp), enabling a 0-60mph time of just 4.3sec and a top speed of 176mph. The plug in hybrid model is incidentally no slouch either, hitting 60mph from rest in 6.3sec and offering a 137mph top speed. 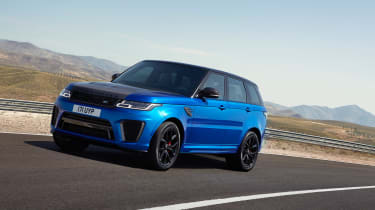 Naturally, the new Range Rover Sport has received a face-lift to identify it from the old, with a new grille, bumpers, re-designed rear spoiler and slimmer – now LED – headlights. Inside, the Sport gains the Touch Pro Duo infotainment system first seen in the Velar, with its twin 10-inch touchscreens. Amongst other improvements are new seats, and the options of a gesture-controlled sun visor and the same semi-aniline leather trim previously only available in the Range Rover.

The new car is available to order now, with first deliveries expected early in 2018.