Limited edition celebrates the golden anniversary of the iconic luxury SUV, with some classic colour options 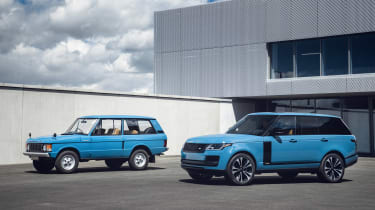 June 17, 2020 marks the fiftieth anniversary of the Range Rover – and to celebrate, Land Rover has announced a limited-edition variant of its flagship to celebrate the car’s half-centenary.

The brand will make 1970 units of the Range Rover Fifty as a nod to the year of the original car’s birth, each based on the Autobiography and packing a healthy specification in addition to the unique celebratory touches.

Items specific to the Fifty include exterior accents in ‘Auric Atlas’, a pair of 22-inch alloy wheel designs unique to the model, and badging with a ‘Fifty’ script penned by Land Rover’s chief creative officer, Gerry McGovern. The badge appears on the car’s exterior, as well as on a ‘1 of 1970’ plaque on the centre console, on the dashboard, the headrests, and the kick plates to each door.

Four standard colours are available – Carpathian Grey, Rosello Red, Aruba, and Santorini Black – but ask nicely and Land Rover Special Vehicle Operations will expand that selection to include three Heritage solid paint options inspired by those original Range Rovers: Tuscan Blue, Bahama Gold and Davos White. The first pair in particular should really stand out, given most customers seem to specify their Range Rovers in silvers and blacks. 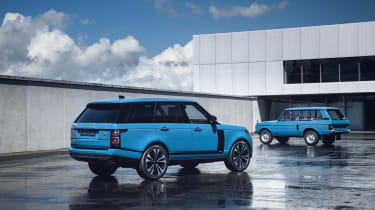 Other than those specific changes though, customers won’t be limited to just one bodystyle or powertrain, as the Fifty will be available both in regular and long-wheelbase forms, as well as with petrol, diesel, and the plug-in hybrid P400e powertrains.

While it’s a shame there’s not more to differentiate the car from a standard Autobiography, it should still appeal to those for whom the heritage of the original go-anywhere luxury vehicle is important.

While it’s hard to imagine someone crossing the Darién Gap or winning the Paris-Dakar in a regular Range Rover today (with Land Rover’s range including cars such as the Discovery Sport and new Defender, there are options that won’t have you treading mud into deep-pile carpet) the modern Range Rover remains a capable car and one as appropriate on a farm as it is in a CEO’s parking space.

Land Rover hasn’t yet confirmed pricing details for the Fifty, nor full specification or ordering details.