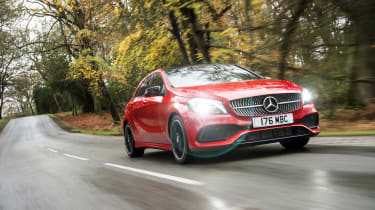 Four-wheel drive and a turbocharged 2.0-litre engine that’s been hand-build off to AMG’s 'one man one engine' principle makes the A45 comfortably the fastest car in the range. It’ll reach 62mph in 4.2 seconds from rest before reaching its 155mph top speed. The rest of the range is, unsurprisingly, not quite as potent.

The engine found in the A250 is fundamentally the same 2.0-litre turbo engine as the full-on AMG car, but without some of the exotic internals to allow the flagship its prodigious power. 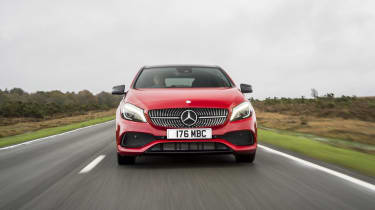 It’s a smooth performer nonetheless, with torque output to match its gruffer diesel relations, and reasonable enthusiasm for revs. To achieve that 6.4-second time you’ll need it in 4Matic four-wheel drive guise, the extra traction it brings allowing it to shave 0.1 seconds off its front-drive relation's figure.

The A220d does the benchmark sprint in 7.5 seconds, it’s 200d and A 180d underlings managing 8.8 - and 11.3 seconds respectively. Add 0.1 seconds to both those figures if you’ve opted for the manual gearbox over the DCT automatic.

The A180 and A200 achieve 8.6 - and 7.8 seconds, again with the DCT, while manual choices once more bring a 0.3-second deficit. Turbocharging in all means even the lower output engines provide decent urgency once on the move, and the A200 and A250 feel acceptably quick in the mid-range. The diesels feel brisk, too, if slightly hampered by their spiky all-or-nothing torque delivery.