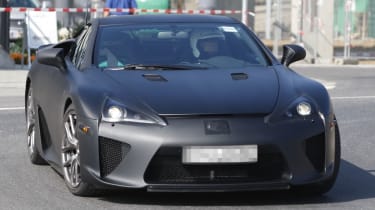 These pictures show a model even more road ready than the last time teasers were drip-fed in June. It now appears to have finalized bodywork, including front and rear bumpers, a lip spoiler, and possibly a rear diffuser. About the only thing covered up is the lighting. Previous spy shots suggest the light clusters to be LED strips at the back, and triangular shaped in front.

The car is rumored to feature a 4.8-litre V10 engine that produces upwards of 600 horsepower. Weight will probably be kept low, with use of carbonfibre throughout the interior and parts of the exterior. The car appears to be using alloy wheels with five double-spokes.

First shown as a concept car at the NAIAS in 2005, the LF-A was also seen as a convertible in January '08. Word on the street is that the production coupe will be on display at the Tokyo Motor Show.

Although previously pundits have said the car will be released as a 2011 model. However, with the Nissan GT-R gaining such tremendous popularity, but Honda pulling the plug on the NSX, Toyota could capture both imagination and market share with a 2010 release.