Bell and Lexus pair up for Pikes Peak attempt 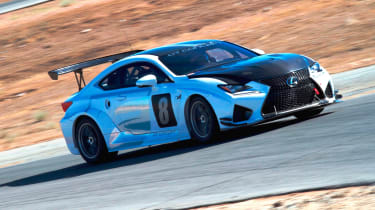 Lexus has revealed the car that it will field in 2015’s Pikes Peak International Hill Climb, the RC F GT concept. Driven by 24 Hours of Le Mans winner Justin Bell (son of Derek Bell), the racing coupe has been stripped and fitted with lightweight carbonfibre parts to shed 362kg from the road car’s kerbweight.

That brings the total number down to 1420kg, meaning the car’s naturally aspirated 5-litre V8 can make better use of its 470bhp and 391lb ft of torque (unchanged from the road car). Power to weight grows by 20 per cent from 271bhp/ton to 336bhp/ton, with the key contributors to this weight loss being the fitment of carbon body panels – the bonnet, boot lid, door panels and front and rear wings are all made from the stuff.

Also added are polycarbonate windows, a carbon rear wing and carbon winglets on the front bumper, while the fitment of a front lip adds downforce and 100mm to the car’s overall length. The car squats 33mm lower and sits 70mm wider on Yokohama Advans in either slick A005- or treaded AD08R-spec, boosting grip and confirming the car’s competition focus. 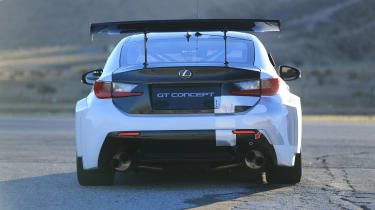 Lexus says that the concept competition car serves as a test bed for several future production components, currently being developed ahead of their fitment to future Lexus F performance vehicles.

Perhaps the biggest challenge facing the Lexus RC F GT concept relates to the hill climb’s 14,110-foot summit. As the car approaches the peak, as much as 30 per cent of its power (the average amount most naturally aspirated engines lose) will be sapped from the V8’s output thanks to a thinner air supply, meaning power could fall to around 329bhp at the finish. 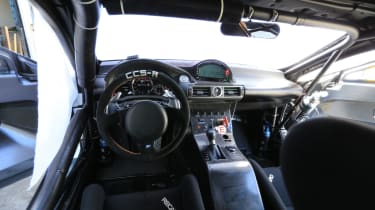 Engineers will be working hard to develop mechanisms to reduce this strangling effect on the engine, which is only made more important given that many of the car’s competitors make use of efficiency boosting turbocharging, or even full-electric power (which is immune to the air’s effects).

evo’s Richard Meaden remembers the challenges of Pikes Peak well, having competed in the event twice, first in 2007 and then again the following year. ‘You find yourself being out of puff all of the way up,’ he explains. ‘It’s harder to breathe the higher you get up, so you can appreciate yourself why the engines lose power.’

The air’s strangling effects were even worse for Meaden, because his Dallenbach Special open-wheeler fed its V8 fuel through carburettors, which, unlike the fuel injection system fitted to the RC F GT concept, couldn’t adjust the fuel to air mixture as oxygen thinned higher up the mountain. ‘Cooling is also a major challenge, as the thinner air doesn’t do such a good job of taking heat away from the engine,' he explains. 'But driving that car on the dirt sections was just magic.’ 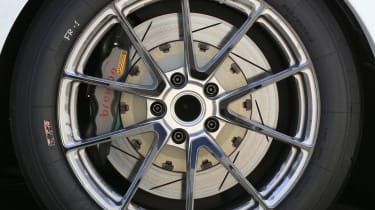 Meaden impressed in 2008, finishing fifth in class when the course featured a mix of both dirt and tarmac surfaces. But today, the entire road has been tarmacked; something Meaden says ‘is a massive shame’.

Either way, it’s clear that Pikes Peak will present the Lexus RC F GT concept with several major challenges when makes its debut at the 93rd running of the hill climb on 28 June. It’ll race against the clock up the 12.42-mile road, climbing 4725-feet through 156 corners.

Previous winners of the event include Sebastien Loeb, who broke records in the purpose built Peugeot 208 T16 of 2013. The less focused Lexus is unlikely to challenge for the top spot, but will fight it out for Time Attack 1 class honours with the likes of a Porsche 911 GT3 Cup car and a race-prepped Jaguar F-Type.

For those wanting to know more about Meaden’s 2008 run up the hill, ride on board with him in the video below. The space-frame car he’s driving weighs just 750kg, and its 7-litre V8 produces 750bhp. Don’t be fooled into thinking those massive wings provided masses of downforce either, Dickie confirms that the less dense air of Pikes Peak’s high altitude ensured their effects were limited…