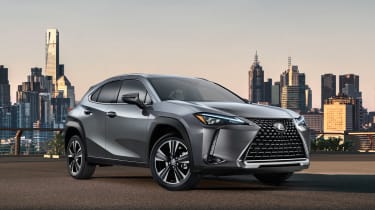 Lexus first revealed images of the UX crossover last week, but coinciding with the opening of the Geneva motor show, Lexus has shown off the car in full – and it’s pretty much as we expected.

Designed to sit under the NX SUV, the UX is based on Toyota’s new generation compact modular platform that also underpins the latest Prius and C-HR. As a result, the available engine choices are predictably sensible, comprising a hybrid and an entry-level 2-litre naturally aspirated model dubbed UX250h and UX200 respectively.

At 4495mm in length, the UX is around 60mm longer than a BMW X1, but stands nearly 100mm less tall, reflecting its slightly strange not-quite-SUV, not-quite-hatchback body shape. This is capitalised on by a relatively long bonnet and cab-back silhouette, somewhat at odds with the pure front-wheel-drive layout. 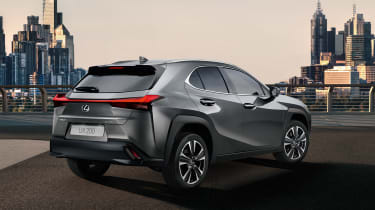 Like most vehicles of this ilk, though, the UX is more about style than substance, taking its design inspiration from the extroverted UX Concept that Lexus presented at the 2016 Paris motor show. As a result, the UX’s heavily faceted bodywork, huge spindle grille and complex lighting units look suitably modern, if not entirely resolved. One aesthetic highlight is the full-width rear light bar, which almost seems to be extruded from the bodywork. The overall effect is distinctive, one might say, but it will at least stand out in the M&S car park.

Inside the UX, Lexus’s current streak of well-considered, thoughtfully constructed interiors is intact, with a clean, simple layout dominated by a high-mounted infotainment screen and a typical Lexus instrument cluster. The company describes the trim inlays as being inspired by the texture of fine Japanese paper – a thoughtful touch in the sea of fake carbonfibre often present in many of the UX’s rivals.

As with most crossover SUVs, the UX is unlikely to receive any great wave of appreciation from us, but if cars like this are what keep projects like the excellent LC coupe and GS F viable, it’s got to be worth it.