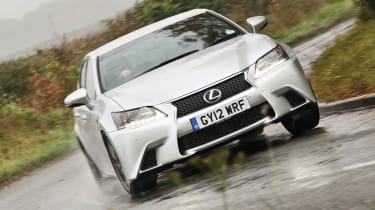 What is it? The Lexus GS450h F Sport, the hybrid version of the fourth-generation GS saloon with a performance-minded trim. It costs from £50,995. Technical highlights? The F Sport trim costs £6000 more than standard, but brings more aggressive looks, sharper suspension, stiffer bushing and adaptive damping, which uses low-viscosity oil to reduce friction. The hybrid drivetrain combines a 288bhp 3.5-litre V6 petrol engine with a 147kW (197bhp) electric motor. Both drive the rear wheels with a combined total of 340bhp (at 6000rpm). Unfortunately, it’s only available with a variable single-ratio CVT gearbox. What’s it like to drive? Hardcore IS-F and LFA aside, the GS450h F Sport is probably the best-handling Lexus we’ve driven. The steering is artificial but is actually nicely weighted, and the GS feels more nimble than its sizeable 1.9-ton kerbweight suggests, perhaps helped by the 450h’s standard four-wheel steering. It’s unexpectedly engaging to drive, and with all the power sent to the rear wheels, the instant torque of its electric motors can bring the back end into play if you’re committed enough. The F Sport-spec ride is very firm – and proves a bit too jiggly for the GS to match the cruising ability of its hybrid rivals – but the payoff is it feels in its comfort zone on more challenging roads, and the chassis set-up has clearly been given to someone who cares about driving. Sadly, though, the gearbox choice hasn’t, and the CVT transmission makes the claimed 340bhp and 5.9sec 0-62mph time feel optimistic. The only way to extract decent pace from the drivetrain is to drive with a very heavy right foot. That leads to a decidedly buzzy and unpleasant soundtrack, not to mention less than 30mpg, when the claimed figure is 45.6… How does it compare? F Sport trim demands an extra £6000 over a standard GS450h, but it transforms the car into one that should interest enthusiasts. Rivals are the £46,835 Audi A6 BiTDI S-line and £47,595 BMW 535d M Sport, both using mighty 309bhp turbodiesel engines. They feel and sound much quicker than the Lexus and are more conventional to drive, if a little staid beside the GS, which will be a much rarer sight. Anything else I need to know? The base GS250 is also available with the F Sport treatment. It uses a 206bhp 2.5-litre V6 (with no electric motor) and a more conventional six-speed automatic ’box, while costing £11k less than its hybrid counterpart. It could be one of the most surprising Q-cars on sale.