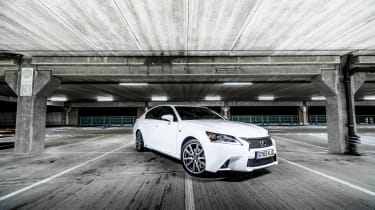 Both the 300h and 450h follow the same hybrid principle, though obviously in the 450h the electric motor is mated to a larger 3.5-litre V6 engine over the 300h’s 2.5-litre four-cylinder unit. Both are direct-injection petrol engines, the 2.5-litre four producing 178bhp on its own and the V6 288bhp. To that the permanent magnet synchronous electric motors add 141bhp to the 300h's output and 197bhp to the V6, though the gains aren’t as much as you’d imagine when taken as a whole. The maximum system output of the 300h’s two motors is 220bhp, while the 450h produces up to 341bhp.

As with all the current Lexus hybrids those combined outputs drive through an e-CVT automatic transmission and it is undoubtedly the weakest link in the whole mating of electric and internal combustion forces. It maximises efficiency by sitting at the engine’s optimum revs for any particular moment, which does little for refinement when you want to accelerate. It’s fine as long as you don’t ask too much from it, but demand power for an overtake and the engine flares up to high revs and hangs on, in a manner that’s rather unbecoming of a genteel executive class saloon. 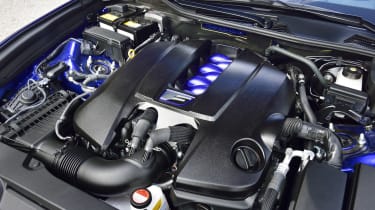 Once again, it's the naturally-aspirated V8 of the GS F that's most satisfying. With the mantra that there's no replacement for displacement, Lexus has slot the 5-litre V8 from the RC F coupe behind the angular spindle grille. Its power figures don't set any new records, with 471bhp and 391lb ft of torque at its disposal, but with the former developed at a 7100rpm power peak there's a clue to the engine's behaviour - it thrives on revs.

Like the hybrids, it also has the ability to combust using an economy-friendly Atkinson cycle, which holds the intake valve open for a longer duration to reduce the compression ratio. This trades maximum power for greater fuel efficiency. In the F, it's only part-time and reverts to Otto cycle combustion when more thrust is needed; in the hybrids, the electric motor makes up for any power deficit.

The GS F's power is sent through an eight-speed torque converter automatic rather than a CVT, and a torque vectoring differential at the rear wheels. The diff is particularly clever, using electronically-actuated clutches to vary output across the axle according to the car's traction needs.