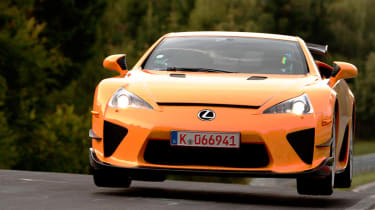 The Lexus LFA Nurburgring Edition is one of the fastest road cars ever at the Nordschleife. Chris Harris puts it to the test around the Green Hell in the video below. Just 50 Nurburgring Editions will be made, out of a total run of 500 LFAs, celebrating a hat-trick of class wins in the Ring 24hrs. Each will cost £63,000 on top of the standard LFA’s £352,000. Personal tuition from a works LFA driver and a year’s Ring-lappery are thrown in for free.

Peak power from the LFA’s bespoke 4.8-litre V10 engine is up 10bhp, from 552 to 562bhp, though quoted torque remains the same at 354lb ft, produced at a high 6800rpm. As the figures suggest, the engine thrives on revs. Thankfully, the noise is just as terrific as before.

That huge, fixed rear wing is unique to the Nürburgring Edition (regular LFA has a much smaller appendage that rises at speed). It’s one of several new CFRP (carbon fibre reinforced plastic) components on the car, contributing to a weight saving of around 100kg.

You can read the full technical story and all of Harris’s driving impressions (plus the story of the LFA Nurburgring’s absurd Nordschleife launch) in evo Issue 163, on sale now. Full details here.