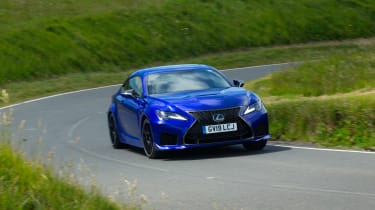 In objective terms, the Lexus RC F is not a class-leading sports coupe. It’s not as crisp as a BMW M4, as rounded as an Audi RS5, nor as brutally fast as a Mercedes-AMG C63 S Coupe. Its price-point isn’t far from its more able rivals either, so there’s not even a serious value-for-money benefit to consider.

And yet, the Lexus RC F occupies a high place in our affections because the thrill of driving is not always about outright ability or figures on a spec sheet. The RC F is about more than that. Its desirability is derived from an increasingly rare combination of elements that really do make it a unique entity in the new car marketplace, for now.

> Click here for our review of the Audi RS5 Coupe

The wild styling helps, so too its rarity, but the Lexus RC F’s biggest asset is the jewel under its bonnet. The 4969 cubic centimetres of naturally aspirated Japanese V8 that not only dominates the RC F, but in 2019 defines it in a way that appeals to us more than acceleration times or, heaven forbid, mpg figures. It’s not perfect, but it remains the centrepoint of a package that pulls on the heartstrings like few others. 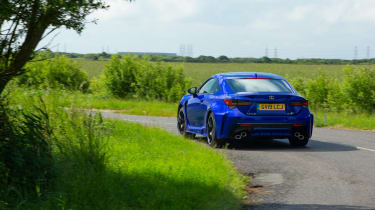 A basic RC F costs from £62,900 – just a touch below the most affordable of its German rivals. For that price, kit levels are strong, with highlights including 19-inch wheels, six-piston Brembo front brakes, adaptive dampers, LED lights all around, heated and cooled nappa leather and Alcantara interior trim, and a retractable rear wing. The RC F Carbon costs an extra £7000 and features a roof skin, bonnet and rear spoiler made from – you guessed it – carbonfibre.

New for the 2019 model year is the Track Edition, which might cost a further £10,000 at a pretty serious £79,900, but adds a higher, fixed rear wing, more boisterous interior trim, forged BBS alloy wheels, a torque-vectoring rear differential (TVD) and carbon-ceramic brakes. Lexus will only be bringing limited numbers of the Track Edition to the UK, but if you miss out (or if that wing is a little strong for you) there is an optional Track Pack available on the rest of the range that adds the forged wheels, carbon-ceramics and TVD for £9750.

Most of the Lexus’s main rivals are from Germany, yet the class is not quite as clear-cut as it was at the time of the RC F’s launch back in 2014. The BMW M4 is the most obvious rival, and in £67,410 Competition specification – the only version currently available – remains the class leader in terms of its dynamic excellence and the all-round entertainment it offers. It’s more aggressive than the RC F – the twin-turbocharged straight-six, although 26bhp down on the Lexus’s V8, is rabid by comparison, but also trickier to manage, too. This also helps the German car feel sharper, more agile and more exciting more of the time. The current M4 does have the caveat of its imminent discontinuation, as there’s an all-new model due next year, but if you get in quick, an M4 Competition with a manual transmission remains a very desirable sports coupe.

Audi’s RS5 is more of a rounded sporting GT than an out-and-out sports coupe, and is just about to go through a mid-life refresh of its own. It has huge amounts of four-wheel-drive traction and a powerful, smooth and torquey twin-turbo V6 engine with 444bhp (identical to the M4 Competition). The chassis is deftly balanced and capable of inhaling the worst British B-roads thanks to some well judged damping, but the RS5 is perhaps not as immediately exciting as its rivals, the Lexus included. At £68,985, it’s an expensive entry compared to the Lexus, but very well specified to compensate.

If muscle and brawn are more your style then the Mercedes-AMG C63 Coupe could be right up your street. Like the Lexus, the AMG has a V8, but adds two turbochargers nestled between the banks of cylinders, adding both power and torque. In ‘S’ form, the AMG peaks at 503bhp, with 516lb ft of torque, so although it isn’t much lighter than the RC F at 1725kg, it hits 62mph in just 3.9sec, 0.4sec faster. You pay for such pace, though: the S will set you back £78,158 before you even look at the options list. If that sounds a bit rich, there’s always the non-S C63, which has 469bhp – just 1bhp less than the Lexus – and starts at £68,719.

Finally, it may not be a coupe, but don’t discount the Alfa Romeo Giulia Quadrifoglio. It matches the Mercedes for power and acceleration, the BMW for precision and agility, and beats everything in terms of fun and on-road pace. And it’s competitively priced, too, at £62,924. 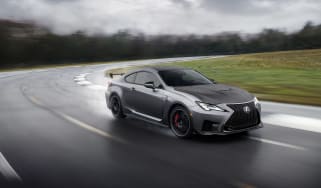 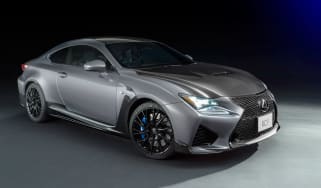 To celebrate a decade-worth of high-performance F models, Lexus has revealed the RC F 10th Anniversary.
Skip to HeaderSkip to Content