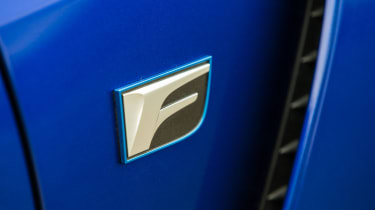 The RC F’s recent facelift may not have considerably changed the divisive looks from a distance, but it has usefully sharpened certain somewhat clumsy details of the previous model. The new one-piece headlights aren’t quite as contrived as the previous units, which from some angles seemed to melt into the sometimes flabby bodywork surrounding them.

The rear lights have also now switched to all-LED units that sit more proud of the car’s outer corners. The ‘L’ graphic in the rear lights is more defined, while the smoked elements add more aggression to the rear end. The distinctive diagonally stacked exhausts also remain, and although a little overwhelmed in size by the sheer visual mass of the car, they certainly help make the RC F look more exotic and exciting than its sometimes sterile German rivals.

The Carbon and Track Edition cars add a tuner-like aspect to the styling, which depending on your aesthetic leanings is either crude or a brilliantly contrast to the RC-F’s ornate detailing. Regardless of trim, the aesthetics are certainly helped by the Track Edition’s forged BBS wheels, which finally have enough visual heft to carry the chunky body.