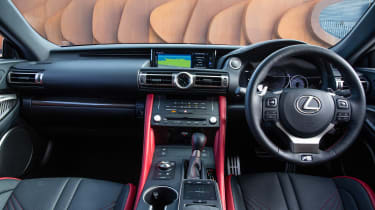 Slide into the cabin and the driving position takes a little getting used to. It’s not particularly low, but the view out feels slightly obstructed, as if the scuttle is too high. It’s somewhat reminiscent of being in a TVR or Aston Martin, and exaggerated by the strip of bonnet visible from the front seats. Drive away and the stiff accelerator pedal motion, relatively heavy steering and lumpen low-speed ride only add to the cumbersome feeling.

However, as speed rises, over 40-50mph, the suspension seems to find its range and begins to flow in a more dignified manner than your first impressions suggest it might. The new adaptive dampers have usefully increased the amount of body support over larger undulations: where before the body would have begun to lose some of its composure, it now hunkers down and better utilises the suspension travel. The lowered unsprung weight afforded by the Track Pack’s forged wheels and carbon-ceramic brakes helps here too, giving you extra confidence that the car will not be knocked off-line when things get rough. 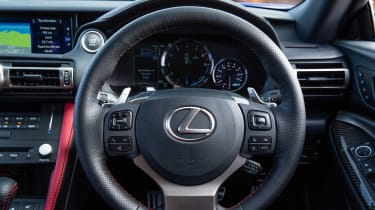 That same fluidity is maintained through longer, wider corners, and regardless of damper mode the RC F settles onto a well-supported outer-rear corner, the throttle allowing just a slight influence over the car’s attitude. If this all sounds a little flat, there is a remedy: drive through the heavy control weights, become more liberal with your inputs, and the RC F responds accordingly, switching from chunky GT to something more sports car-like.

If you want more freedom to exploit the engine’s top-end power and the super-accurate control it grants you in slower corners, you can switch the stability control (or VDIM – Vehicle Dynamics Integrated Management – in Lexus-speak) fully off, or there’s also an ‘Expert’ mode in which the electronics take a back seat and only intervene to prevent a spin.

We’ve only driven RC Fs with the optional TVD differential. In its Standard and Slalom modes it can be frustrating at higher speeds, taking its time to engage and allows the inside rear wheel to spin and saps away at your momentum. On the occasions it does lock, it then tries to quell any slide before you’ve had chance to enjoy it or react to it. It’s the final, most focused Track setting that provides the most natural responses, the diff engaging as soon as you touch the throttle and staying locked as you dictate your angle of slide with the throttle. It can easily be kept small and tidy or pushed large and boisterous depending on how much throttle you choose to use.

The RC F is not as talented dynamically as an M4, as capable as an RS5, or as boisterous and lairy as a Mercedes-AMG C63 S, but it is certainly gratifying, and because you’re never quite carrying the sheer speed of those German rivals, it feels more exploitative on the road.