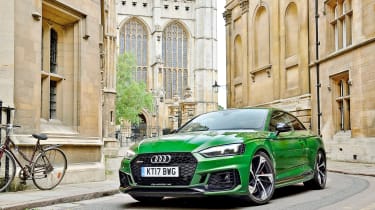 The original Audi RS5 debuted in 2010 and was arguably the brand’s best attempt yet to recapture the magic of its legendary ur Quattro. Featuring a similar four-seat coupe body, flared wheel arches and four-wheel drive, it ticked all the right boxes. And while it lacked the original’s five-cylinder soundtrack, it compensated with its howling V8.

In fact, this naturally aspirated 4.2-litre 8-cylinder unit was the dynamic highlight. The rest of the car just failed to live up to the promise of its raw ingredients. It was fast and composed, but it lacked the driver involvement that marked out the best, such as the BMW M4.

However, there’s now an all-new Audi RS5 that’s been developed to address the old version’s shortcomings. Lighter, faster and powered by a powerful new twin turbocharged V6, it promises to be one of the firm’s most engaging and entertaining machines yet. At least that’s what Audi claims.

Before you even so much as open the driver’s door Audi is keen to point out that the RS5 has been designed to cover a wider brief than its immediate rivals. In fact, bosses stress that this is a high performance GT car that can be transformed into razor-sharp sports coupe as and when the mood takes.

> Performance and 0-60 time - The RS5 edges out the competition in a launch style start covering 0-62mph in 3.9sec and is capable of de-limited 174mph top speed.

> Engine and gearbox - The 2.9-litre, twin-turbocharged V6 develops 444bhp, but the gains have been made in the mid-range courtesy of 442lb ft of torque available from 1900rpm.

> Ride and handling - The new RS5 has progressed significantly over the old model, lighter, more focused and hugely capable, although it still feels a bit inert alongside rivals.

> MPG and running costs - The smaller blown engine makes the RS5 more efficient than its predecessor, with Audi claiming 32.5mpg on a combined cycle.

> Interior and tech - The RS5 does justice to Audi’s reputation of producing class-leading interiors crammed with an endless list of tech functions.

> Design - A collection of tasteful exterior tweaks imbue the RS5 with the necessary aggression to wear the RS badge.

Priced at £63,615 in standard trim, the RS5 splits BMW’s M4 and Mercedes-AMG’s C63 in terms of price, however like these rivals, you can upgrade to a more expensive trim in the shape of the Carbon Edition (£76,115).

For the hefty premium Audi fits bigger wheels, matrix LED headlights and plenty of carbonfibre addenda, inside and out; the front/rear spoilers, sill extensions and diffuser insert are all made from the lightweight material. The package does lend the RS5 some welcome aggression – that said, it's not worth the £13k in our eyes. One aesthetic-based visual option we can recommend specifying, though, is the £645 Sonoma Green paint finish.

Moreover, the performance-based options on offer are certainly worth looking at: dynamic ride control (£2000) and dynamic steering (£900) constitute the chassis upgrades available; the former is a must have, while the jury is still out on the latter, as it is on the £6000 carbon-ceramic brakes (unless you have track work in mind). While pricey, at £900, the head-up display is a useful addition that augments Audi’s virtual cockpit instrument display.

There’s no arguing the BMW M4 is a more precise driving tool than the RS5, even more so in Competition Pack specification (£64k), with a more involving chassis on account of its rear-driven set-up – it is an M car, after all. However, it can’t play the continent-crusher as well as the comfortable Audi.

In AMG fashion the C63 is marked out by its powerplant. Where rivals opt for six-cylinder engines, the C63 – in true tradition – has a 469bhp V8, and it makes no secret of it, bellowing out a typically raucous AMG soundtrack, hauling you down the road with no let-up.