The BMW M4 Competition Pack went head-to-head with the Audi RS5 and Mercedes-AMG C63 S in a Supertest in evo 240. Read the online version of that Supertest here and subscribe to evo for all the evo Supertests in full.

Here's what we thought of the BMW M4 against its rivals... 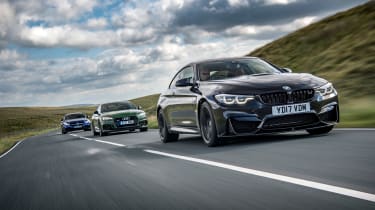 Since its introduction BMW’s M4 has struggled to find favour to some extent – on the right roads (smoothly surfaced) and in the right conditions (dry) – it’s always been wonderful but when the going gets tough the regular M4 has often been a wayward companion. With this in mind it was with some trepidation that the latest Competition Pack-equipped M4 was pitched head-to-head with Audi’s new RS5 and Mercedes-AMG’s C63 S.

The Competition Pack has transformed the M4 though, and it had little trouble in impressing with its power delivery, ballistic pace, light weight, agility and poised handling.

It’s a little bizarre referring to the BMW M4 as a featherweight at 1645kg, but it’s over 150kg lighter than the Audi RS5 and over 200kg trimmer than the AMG. Despite this the M4 was the slowest of this trio to 60mph in our tests (taking 4.4sec versus 4.3 for the AMG and a bonkers 3.6 for the Audi). The RS5’s four-wheel drive made it unbeatable while the AMG’s 60bhp power advantage helped it beat the M4.

A lack of traction hinders the M4 off the line but by the time 150mph was reached the BMW had caught the Mercedes and was a significant two seconds faster than the RS5.

Given the M4’s spiky reputation one might have thought it would struggle on Bedford’s West Circuit but it was comfortably faster than both the RS5 and the C63 S, eclipsing their times by 1.6 and 2.2sec respectively. The M4’s lighter weight is a big advantage on track and while it could become rather lairy with the traction control switched off if you’re neat and tidy it’s hugely rewarding.

In the tighter turns it tended to suffer from more understeer than its rivals but through the quicker corners the M4 was markedly faster allowing it to press home its advantage on the following straights.