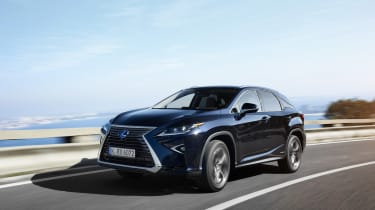 Not only will the drivetrain have you happy to lollop along sedately, but so too does the RX’s dynamics. To meet the firm's handling and ride goals, the RX is available with electronically controlled Adaptive Variable Suspension, and optional active anti-roll bars. Unfortunately, Lexus UK has chosen not to offer the latter on UK cars.

As has become the norm, comfort and sport modes allow drivers to tailor the damping behaviour to suit different driving styles, along with equivalent changes to steering effort, transmission and throttle response, and in the case of Eco mode, different air conditioning settings.

Handling in both models is best described as ‘safe’. There's not much steering feel but the rate of response and weighting are both consistent, so you can place the car accurately – until tyre squeal sets in, quickly followed by persistent understeer. 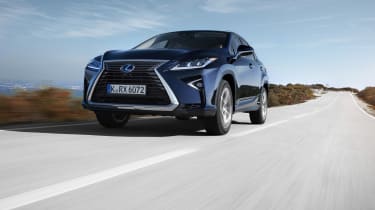 The 200t feels a little lighter in the nose but the 450h rides with a little more pliancy. It weighs upwards of 2100kg though, which really manifests itself in quick direction changes, where the electronic damping struggles to keep up and the car bobs around, even in the firmer Sport mode.

Lexus should be commended for refining brake pedal feel on its hybrid model though – it’s getting very difficult to discern the difference between electrical regeneration and friction braking. Both are comfortable cars too, and the solidly-built cabin, cosseting seats and quality touch points all boost the ownership (if not the driving) experience.