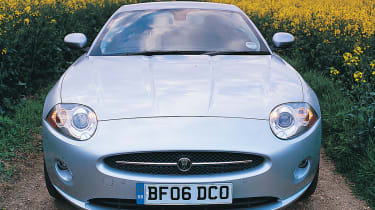 Took BF06 DCO along to Guy Salmon Jaguar in Northampton recently for its first, 10,000-mile service - the very first XK in the UK to reach that landmark, according to the service dept. It’s basically just an oil change, so the bill for £246.42 found me struggling to affect nonchalance as I handed over my credit card.

I’d also asked Guy Salmon to investigate a spasmodic starting problem. Just occasionally when I press the starter button the ignition lights come on in the usual way but, when the engine should be bursting into life a second later… nothing. I have to switch off and go through the procedure as many as four times before the starter motor whirrs the V8 into life.

Even more occasionally a message flashes up in the centre of the instrument binnacle. ‘Check smart key’ it says. Guy Salmon aren’t sure whether it’s a problem with the key or the car, so I’ve first to obtain the spare key from Jaguar and give that a try. If it’s the car, a control unit will have to be rebooted and the keys reprogrammed.

Little things like this do take some of the gloss off the XK experience, but it’s still pretty darned shiny. Its greatest strength is its ability to devour great distances utterly effortlessly while retaining its sporting edge. And it looks terrific, even with its preposterous old-school radio aerial jutting skyward (I’m told Jaguar is working on a solution to that; ditto the lack of MP3-player connectivity).

In fact, just about the only serious flaw is the almost laughable lack of space in the rear, which was highlighted again just recently. It was our daughter Hannah’s prom night and I’d have loved to have used the Jag to take her and Tom to the ball, but apparently they really wanted to turn up together. Kids, eh? Fortunately Bentley came to the rescue (cheers, Simon) with a Flying Spur (blimey, that thing can shift). Anyway, it was a proud moment, and one I just wanted to share with you. Well, we go back a long way…