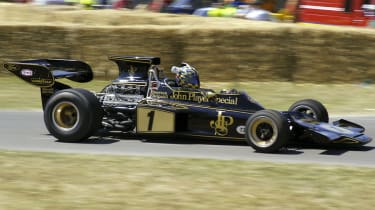 The team will initially be based in Norfolk, but all future R&D, manufacturing, and the team’s technical centre will be located Malaysia’s Sepang International circuit. This hints at the financial backing behind the venture: a partnership between the Malaysian government and a consortium of Malaysian entrepreneurs.

Team principle will be Tony Fernandes, founder of Tune Group which owns Air Asia. A wealth of F1 experience will come with Mike Gascoyne who has been appointed technical director. His 20 years experience in the sport includes stints at Jordan, Renault and, most recently, Force India.

Lotus has been awarded the final place on the grid for the 2010 along with three other new teams – Campos GP, Manor and US F1. BMW Sauber has been designated “14th” on the grid, meaning it’s actually first on the reserve list. However, it’s looking likely that the FIA will make space for them by increasing the F1 grid to 28 places from next season.

Team Lotus competed in grand prix racing from 1958 to 1994 when financial pressures forced it to withdraw. Despite a long absence, it remains the fourth most successful constructor in F1 with seven constructors’ and six drivers’ titles. Jim Clarke, Graham Hill and Ayrton Senna have all driven for the team.