Created from a tepid family hatchback, the Talbot Sunbeam Lotus was a World Rally winner and an early hot hatch star 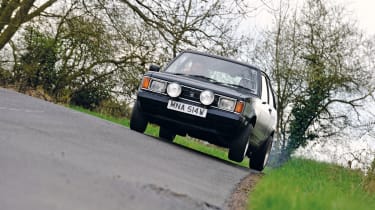 Announce the following spec for a hot hatch today and I’d place a healthy wager that order books would be overflowing, briefcases stuffed with deposit cash would be walking into showrooms and internet forums would be white-hot: rear-wheel drive, 960kg, 150bhp, 0-60mph in 6.6sec and suspension developed by Lotus. Mouth-watering, isn’t it? Of course, great actors don’t necessarily make for a great film, but lob in some WRC wins and it gets harder and harder to resist.

Only 1184 right-hand-drive examples of the Sunbeam Lotus were ever built, approximately half the total number. But sadly, you’d be lucky to find 80 of these running around in the height of summer today, according to the owners’ club. Most have inevitably been swept into a pile of oxidised iron. But rolling into the car park where evo photographer Dean Smith and I are waiting on a showery April morning, this Series 1 car is resplendent in trademark Embassy Black with silver stripes. You can tell it’s a Series 1 because of the smaller lights at the front and the Chrysler Pentastar badge in the middle of the full-width grille.

At this point, some of you may be thinking: ‘But I thought it was a Talbot?’ So I’d better lay down a very brief history of the car. Back in the late 1970s, the British car industry was in turmoil (to put it mildly) and Chrysler UK was no exception. Chrysler had taken over the Rootes Group, which was basically a conglomeration of famous small marques like Hillman and Singer, and the Sunbeam was essentially a project funded by the British government in order to stop Chrysler UK from shutting down the ailing manufacturing plant at Linwood, just  outside Glasgow.

The Sunbeam, launched in 1977, was basically a cut-down Avenger. From the outset, Chrysler’s head of motorsport, Des O’Dell, had wanted to follow on from the Avenger’s success in rallying and challenge Ford’s Escorts head on. Much of the Avenger rally car’s running gear was swapped straight to the Sunbeam, but an engine with decent power was needed. The solution came from Lotus, which had been selling 2-litre engines to Jensen but was left with a shortfall in business when Jensen went under. O’Dell’s deputy, Wynne Mitchell, had been to university with Lotus’s then-MD Mike Kimberley, and a deal was soon struck.

The engine supplied was a naturally aspirated 2.2-litre four-cylinder (designated type 911 and closely related to the type 912 found in the S2 and S3 Esprits). It put out 150bhp in road trim, but importantly for O’Dell, it was also easily tuneable to well over 200bhp for rally use.

The road-going Sunbeam Lotus was unveiled at the Geneva motor show in April 1979. By then the ailing Chrysler UK had been sold to PSA, and by the time deliveries began that summer, Peugeot had dredged up the Talbot brand and renamed the Sunbeam as such, but there was a slightly awkward period where the Series 1 cars were called Talbots but badged as Chryslers.

Lotus wasn’t just an engine supplier – it was also involved in designing the suspension and exhaust system. In fact, once the rolling chassis had been built on the production line at Linwood, they were transported down to Ludham airfield in Norfolk. Here they were fitted with the twin-cam engines (which were built at Hethel) and ZF five-speed gearboxes.

For the Series 2 cars that came along in 1981, a big T was placed in the middle of the grille, the engine was mildly tweaked, the fuel tank and headlights were enlarged and the wing mirrors were changed. By 1982, Moonstone Blue was the only available colour. The other well-known cars were the Avon Coachworks special editions, which had Talbot dark blue bands over the Moonstone paintwork, green and yellow Lotus badges and a vinyl roof. There were meant to be 150 of these, registered from DDU 1Y to DDU 150Y, but only 56 were ever officially converted (which confusingly weren’t DDU 1Y to DDU 56Y).

Anyway, back to the rural Bedfordshire car park surrounded by blossoming yellow rapeseed. Although I’ve long been fascinated by the Sunbeam Lotus and love the idea of driving one, the sight of this simple, almost anonymous shape is not initially one to set the heart racing. It’s hard to put your finger on precisely why, but the bonnet looks a little too long and the rear screen looks huge. Dave Merlane from the Sunbeam Lotus Owners Club (which actually owns this car) has very kindly driven it up to meet us, and admits that although it’s not the most pristine example, it is running well, which is the important thing.

Whilst Dean sets about shooting the details, Dave points out a few interesting bits and pieces, like the speedo that goes round to 140mph (the speedo in the Sunbeam GLS on which the Lotus is based only reads to 120mph; it’s one of the easiest ways to distinguish a real car from a replica). A quick look under the bonnet reveals an engine bay that is surprisingly full with the longitudinally mounted four-cylinder. Dave apologises that the car is on non-original, one-inch-wider Minilites, but they didn’t have time to change the wheels for a set of original alloys (we did ring at very short notice!). They do look good, though.

Once Dean’s finished and we’ve sheltered from a brief hailstorm, it’s time to go for a drive through the lanes. The ignition key is an intrugiuing bright blue, the colour of a J-cloth, and like the grille has a Chrysler badge on it. Pop it into the left-hand side of the steering column, turn the ignition on, wait ten seconds, pump the throttle a couple of times, twist again to trigger the starter motor and the twin-cam bursts into life. Never touch the choke, warns Dave: ‘Even on the coldest days, you’ll just flood the engine.’

Sitting there with the engine idling, I can’t help but blip the accelerator a few times. Not a lot, but just enough to tickle the revs up a tad and feel that wonderful sense of instant connection between pedal and combustion you get with a cable-operated throttle. The engine runs on twin 45mm Dellorto carburettors (the same as on my RS2000 Escort) and sounds suitably rorty, with a lovely gruff undertone.

The ZF five-speed has a dogleg first gear. This car has a non-standard gearlever that looks almost comically long and spindly, but it places the gearknob conveniently close to the steering wheel so that your left hand doesn’t have to travel far to fall onto it.

A few revs, bring the clutch up, up a bit more… eventually find the high biting point and we’re off. The B-roads we’ve chosen are slightly further south of our normal B660 haunt but are just as testing. The ride is initially surprisingly firm over the lumpy tarmac, but build up a bit of speed and the car seems to settle and soak up the bumps better, the suspension’s damping clearly designed to inspire confidence when pushing on rather than to cosset at a crawl.

Almost instantly, we run into another rain shower and I’m forced to investigate which of the knitting needles behind the wheel works the windscreen wipers. After indicating left and switching the headlights on, I manage to swish the water from the glass and then locate the switch for the rear wiper, which arcs down from the top of the glass hatch at the back.

The ZF’s shift seems to be lovely as long as you don’t rush the change too much, with a really positive engagement and decent weighting across the gate so that you always know where you are with it. The steering is heavy but reassuringly positive and after a few minutes in the car, you feel like you’re being egged on to go faster. So you drop down a gear (any excuse to blip the throttle) and squeeze the right-hand pedal harder, letting the revs run higher and marvelling at what suddenly feels like a startlingly quick little car. Given the engine under the bonnet is totally standard, I’m amazed at the pace it’s generating as the road opens up. Before driving it, I’d thought the claimed sub-7sec 0-60mph time was about as likely as someone not called Sébastien winning a WRC round, but now I can well believe it.

It’s addictive, too. The twin-cam is so lively and eager to rev and sounds so superb that, as with all good hot hatches, you want to drive everywhere flat-out. The chassis underneath you feels very short and square compared to an Escort’s. If you watch period rally footage of Henri Toivonen et al driving Sunbeams, you’ll notice how quickly and how far they snap into oversteer compared to the Escorts, and you can sense that attitude from behind the wheel.

The impressive grip from the wide-feeling front end gives you a lot of confidence and understeer doesn’t seem to be on the menu at all. You want to throw the car around as a result, but it also feels like when it does step out of line, it'll do so quickly, making you thankful for the huge amount of lock available. This Sunbeam isn’t as easy to provoke into oversteer as I’d thought (and hoped) it would be, probably due to the wider wheels and some modern rubber, but it’s a lot of fun nevertheless, particularly through quicker corners where the suspension seems to be better dialled in to the surface.

In some ways it seems strange that the Sunbeam Lotus isn’t as revered and desirable as the Mk2 Escort. I suppose it’s because the Escort did it first and then the Sunbeam’s light shone only briefly before it was eclipsed by the fire-breathing Group B monsters. Ironically it’s the Ford’s slightly ludicrous prices that are now dragging up the values of Sunbeams, as people look around for other cars from that era with rear-wheel-drive rallying pedigree.

From a packaging point of view, the transverse-engine, front-wheel-drive layout of GTIs and the like was much more practical than the Sunbeam’s configuration, so it’s probably not a surprise that it took over 20 years for rear-wheel drive to re-emerge in the hot hatch market with the BMW 1-series. But as the M135i proves today, it remains a very compelling concept for those who value driving dynamics just as much as cabin and boot space.

Huge thanks to Graeme Lawton and Dave Merlane at the Sunbeam Lotus Owners Club (www.sunbeamlotus.com) for all their help.