After decades without proper backing, Lotus might finally be able to rival Porsche, once again 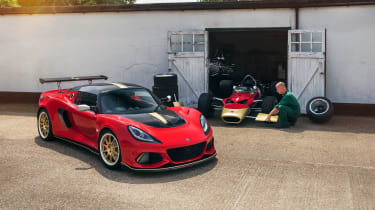 Giant Chinese automotive conglomerate Geely is considering a £1.5 billion cash injection into Lotus, according to a report by financial broadcaster Bloomberg. It comes after Geely took a majority stakeholding in Lotus last September, adding it to a growing number of automotive brands under the Chinese manufacturing giant’s umbrella.

Part of the reported investment is said to earmarked for new facilities in the UK, which will house engineering, design and research departments, all leading to a new wave of production cars. In fostering Lotus’ expertise in composite materials and other lightweight technologies, it’s expected that the developments made will be spread across the Geely group.

Geely is already off to a good with Lotus, bringing it into the black financially, which after years of losses and a limited, aged model line-up is an impressive feat in itself. But you might be thinking that you’ve heard this all before, a reinvigoration into Lotus has been attempted and failed many times, but there is a difference this time around.

For starters, Geely has plenty of experience in reinvigorating established European brands, being sole owners Volvo and its impressive rise from a niche quasi-premium brand to one that can easily be mentioned in the same breath as Mercedes, BMW and Audi. The idea of re-launching a performance car brand is also something the marque has under its belt, with its recently revitalised Polestar brand deadly serious about rivalling Porsche in the future.

Yet its the willingness of parent company Geely to grant autonomy to its brands that has really bred success, as demonstrated so clearly in Volvo’s rise to success. It’s this trusting attitude by Geely’s bosses that  could actually make this attempt at a renewed Lotus a success. Will it work out? only time will tell.