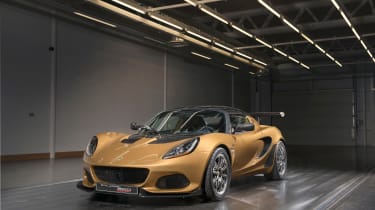 The latest car in the Elise lineage, the Lotus Elise Cup 260, is the fastest and most hardcore yet. Building on the existing Cup 250 and priced around £60k, 30 cars are planned in a limited production run. The 260 borrows hardware and engineering know-how previously bestowed on the bigger Evora GT 430, Exige Cup 380 and Elise Race 250.

Somehow, the mass-obsessed people of Norwich have managed to shave 15kg from the already super-light Cup 250 on which the 260 is based. The rear-wing, front access panel, engine cover and two-piece brake discs contribute towards the diet plan that results in a kerb weight of only 902kg.

Remodelling of bodywork has brought downforce gains of 44 per cent over the Cup 250. Upfront, the louvered arches and front splitter augment the air-bending efforts of the motorsport-derived rear wing and the diffuser mounted below it. All of the above combine to generate 180kg of downforce at 151mph.

The Cup 260 has a set of Yokohama’s stickiest tyres – 10mm wider than the Cup 250’s boots –  as well as a Nitron spring and damper combination that was first implemented in the Exige Cup 380. There is plenty of scope for adjustment with 24 settings for rebound and compression.

Lotus has breathed on the 1.8-litre engine carried over from the 250, liberating another 4bhp and 4lb ft of torque from the supercharged four-pot courtesy of an uprated induction system. A new air-filter has been fitted and the engine management system has been reprogrammed accordingly.

The power boost, suspension overhaul, grippier tyres and increase in downforce allowed the Lotus Elise Cup 260 to sweep round the Hethel test track 2.5sec faster than the Cup 250.