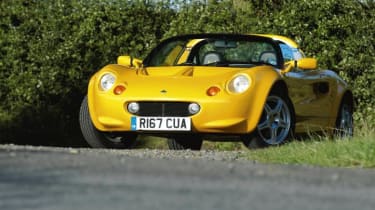 Were fate a kinder bedfellow, I’d have spent our glorious summer making whoopee in my Elise. Instead I’ve spent most of the dry season knocking about in other cars while amassing sufficient funds to pay for all the work that my chums in the Lotus factory service workshops were doing to R167 CUA to make it roadworthy again.

I’d dropped the Elise in with the affable Glenn Smith and his merry serviceers for what I imagined would be a straightforward minor service prior to a trip to this year’s Le Mans. A bit later in the day came the first phone call indicating that a few little extras might be required: a new exhaust back-box, steering rack gaiter, replacement bolts for some of those that hold the undertray in place, and other sundries.

That phone call seemed depressing enough and immediately put the Le Mans trip in doubt as some of the parts weren’t off-the-shelf items. The next call had me eyeing up tall buildings from which to jump; while being run on the rolling road, the Elise had popped off some of its hoses and the leaking coolant had an ominously milky complexion indicating at best a head gasket failure, at worst a dropped cylinder liner. ‘Oh, and by the way, the reason that the coolant had needed topping up so frequently is that the car needs a new radiator, and you might want to sort out some new tyres if you want it to go cleanly through the MOT that’s now due.’ Glenn must have been hoping that, as the messenger, he wasn’t now sitting in my rifle’s crosshairs.

He kindly agreed to prolong the work as long as possible so that I could get my finances in order. Meanwhile I discovered that Lotus now recommends the Yokohama C.drive as a replacement for the original-spec Pirellis, which are no longer made. Lots of people fit wider-than-standard track-biased Yokos to their Elises, me included, so it’ll be interesting to see what a difference narrower, road-only rubber will make.

With all the work done, my Elise is unsurprisingly running better than ever (and sounds great with its new sports exhaust), so I’m praying for this Indian summer to continue, to compensate for the good weather I missed out on.

But anyone tempted by a cheap Elise S1 – and they’re down to as little as £7500 these days – should learn a lesson from my tale of woe. Get your potential purchase checked over by an expert because lots of things wear out on the Elise and to replace them can cost a fortune, as I’ve discovered. Replacing the head gasket, for instance, means dropping the engine out and also involves a new cam timing belt. I wouldn’t want to put you off, but I do advise caution. Right now, though, with my Elise restored to full health, there’s no other car I’d rather have.