This year’s evo Car of the Year meets last year’s. Which of them is destined for true greatness, asks Peter Tomalin 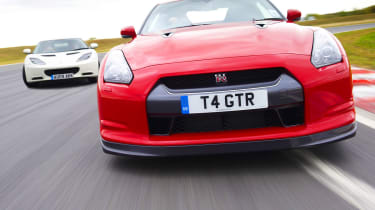 Glancing through the top fives from previous eCotys (see right-hand column), so many memories come racing back. More often than not they’re granite-cold, rain-sodden memories, because most years we’ve headed to north Wales, where the roads and scenery are to die for but the weather’s bloody medieval. Believe me, you haven’t known cold until you’ve stood on a mountain for two hours while a photographer inches 15 cars into position for the cover shot. It’s a kind of cold that eats deep into your bones and won’t leave even when you’ve parked yourself next to a crackling log fire with a stiff drink in hand for a similar length of time. God knows I’ve tried. But oh, what great cars, and what epic, memorable drives.

And, contrary to popular belief, not just in 911s. (If Stuttgart really has been sending us plump brown envelopes they’ve obviously been intercepted by the postie). Most years I reckon we got it right, too. Chris Harris may take the mick out of our Duckfart Metcalfe scoring system, but somehow it just works. Yes, we argued at the time, often till long into a beer-fuelled night, but looking back we got it pretty much spot on every year. Except in 2000.

That 996 Turbo should never have won. The Diablo 6.0 VT wuz robbed. But then it was a particularly sodden, gale-lashed week in Snowdonia that year. I’ll never forget the sight of Russell Bulgin, raindrops trickling down his face, almost blue from cold but still enthusing wildly from the bathtub cockpit of the Lotus 340R. It was because the conditions were so godawful that the Turbo excelled, making driving quickly ridiculously easy. But it was the glorious Diablo, with its extra layers of emotion and tactility, that gave the truly magical moments behind the wheel.

It’s those moments that usually decide what wins eCoty. Moments that transcend the mere mechanics of going quickly, the physics of cornering and acceleration. I can remember actual stretches of tarmac in specific cars, even from almost a decade ago. A VX220 Turbo on the road to Mallaig in 2003, a Carrera 4S, at night, charging back to Betws-y-Coed after one of those interminable cover shoots back in 2002. I can almost feel the suede-covered wheel moving in my hands right now.

The Evora gives you plenty of moments like that to stock the memory banks. On the second day, a few of us took a group of cars down to the south-western corner of Skye, or at least as far as you can go before the jagged, soaring teeth of the Cuillin mountains bar your way. These were fast roads with occasionally tricky surfaces. The Evora just flowed along them in that sublime way it has: the most exquisitely delicate tugs and shimmies at the wheel, the subtle shifts in weight, a rocking of the shoulders setting up a wonderfully precise trajectory through the turns. I loved its size, its relative simplicity, its Lotusness.

I didn’t even mind the relative lack of firepower. It’s fast enough to be interesting, and compared with the bang-whoosh-gone delivery of some, you can actually savour the swelling power curve as you wring it out, and the hint of an exotic flavour to the blare of its V6. I also drove it most of the way to Scotland, and back again, and when you need it to cruise and just eat the miles, it does that too.

Even though I had the GT3 a solitary point ahead on my personal scoresheet, I was secretly hoping the Lotus would win. Partly because this is all about The Car of the Year, and I think that when we look back at 2009 it will be remembered as The Year of the Evora. Mostly, though, because it had given me more of those precious moments.

I wasn’t present for the second part of last year’s eCoty, so I didn’t experience the GT-R’s moments of magnificence on Mont Ventoux. In fact I’d somehow missed out on driving the GT-R at all, until the week after this year’s eCoty. We’d booked one in so that we could compare it with this year’s winner. And what a fascinating comparison it made – two cars that have more in common than you might immediately twig, and yet are completely and utterly different.

The common ground is easy: both are coupes, both have big-capacity Japanese V6s, and both are two-plus-twos. In fact they’re both similarly useless in this last regard unless you’re talking small kids and even smaller distances (I’m 6ft and my 12-year-old son could just squeeze in behind me in both cars, but only if I compromised my own driving position by a couple of inches). Most important of all, they’re both top-drawer drivers’ cars and they’re in direct competition for your sixty grand.

Which is where some of us struggle with the Evora. All the early cars are specced to the sky, so although the list price is £47,500 the car you see here, with the rear seats, full leather trim and a few extra goodies like sat-nav (and let’s face it, most people are going to want these things), costs £60,493. This particular GT-R Black Edition costs £59,400. And the simple truth is that Nissan gives you substantially more for your money, so much so that you wonder how it can turn a profit.

There’s simply a lot more motor car for a start – the GT-R has massive presence, not least because it’s massive. Then there’s the hardware, from the twin-turbocharged V6 to the ATTESA ET-S four-wheel drive to the dual-clutch paddleshift transmission to the data-loggers and g-meters. This thing drips technology. And most of all, of course, there’s the performance: 0-60 in 3.9sec and 0-100 in 8.4. Which isn’t surprising when rolling-road tests show it’s pumping out well over 500bhp.

In fact when you drive the GT-R for the first time it isn’t the straight-line speed that blows your socks off. It’s the sheer mechanical grip it exerts on the road and the way it absolutely slingshots you out of corners and onto the next straight. I have never known a car that leeches the tarmac and fires you through the apex quite like the GT-R. You can almost begin to understand why David Yu is looking to squeeze even more power out of his GT-R. There’s no question the chassis can handle it, even if there’s a very good chance it’ll get you into trouble somewhere down the road…

The thing is, when and where are you going to use it? You’re doing 50mph on a dual carriageway, you flick down to third and squeeze the throttle for a couple of seconds. You look down. You’re doing one hundred and twenty. And yet if you don’t use the performance you can almost hear the car calling you a wuss. It seems to demand that you drive it like you hired it. So you unleash all that power and technology again, bullying the road into submission. It’s a big willy-waver of a car, but my goodness it’s got a lot to wave.

The Evora can’t compete with that, of course, so it doesn’t even try. Instead of assaulting your senses it feeds you a myriad of subtler sensations and the all too rare feeling of machinery reacting intimately to your inputs. Instead of demolishing distance, it allows you to savour it.

Both are brilliant, though. I’ll stick my neck out and say that both will go down as all-time greats. But even more than usual, choosing a winner on this occasion comes down to purely personal prejudice.

If this contest were a film it would be Lotus Neo versus Nissan Megatron (or maybe Mechagodzilla). Either way, to me the GT-R feels just a little like a sci-fi dinosaur, albeit a fabulous one. The Evora, on the other hand, is a taste of a future where we won’t need massive complication, massive weight and humungous horsepower to get our driving thrills. And that’s absolutely fine by me.