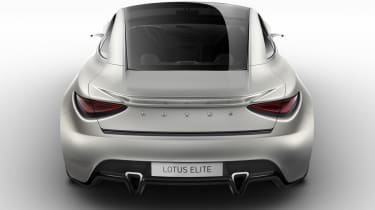 Lotus has revealed its reborn Elite, the first product of the British sports car maker’s new era. Traditionally a purveyor of focused, lightweight cars, Lotus is now turning its attention to more luxurious offerings – the Elite is a 2+2 folding hard top GT set to battle the Aston Martin DB9 and will be priced at around £115,000. It weighs 1650kg – a figure not far short of two Lotus Elises. Helpfully, it has a pretty potent engine up front to help counteract its size – its a supercharged 5.0-litre V8 derived from the Lexus IS-F supersaloon, and is set to boast up to 612bhp and 531lb ft. It revs up to a heady 8500rpm and will apparently hustle the Elite to 62mph in a supercar-spec 3.5sec. The engine will also incorporate hybrid technology and a KERS energy recovery system. Front-mid engined and rear-wheel drive, the Elite boasts a classic GT layout and will also come with a Ferrari California-like folding hard top. It aims to better its rivals for cleanliness, with a quoted CO2 emissions figure of 215g/km – the equivalent of current hot hatchbacks, and enough to keep it out of the highest tax brackets.

Find used Lotus Elite's for sale on the Classic and Performance Car site here. The styling is likely to spark as much debate as Lotus’s change in direction. To our eyes there’s a lot of Japanese influence, with hints of Lexus LFA and Honda S2000 among others. While a nice bit of symmetry to the car’s power source, it may jar with Lotus traditionalists. We’ll make our mind up for sure when Lotuse reveales the Elite – among other things – at the 2010 Paris motor show, which kicks off next week. We’ll reporting live from the show floor, and you can view all the latest news, videos and picture galleries here.