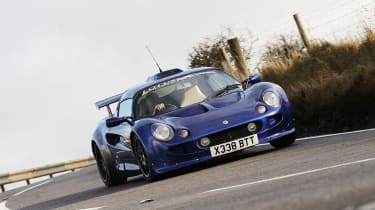 Let’s start with manual window winders and an entry procedure that feels about as dignified as sticking postage stamps on your forehead and climbing into a pillar box – the Exige S1.

Although you know it’s going to be fantastic to drive, if you had one you wouldn’t even have to get into it to enjoy owning it. Just sliding open the garage door and watching the light fall across the miniature Group C racer curves would be enough to send tingles down your spine and convince you that it had been worth buying. Its proportions are sublime, yet it looks so small that it seems as if you could pick it up and pop it in a pocket like a 1:43 model. The detailing, from the abrupt Kamm tail through the roof scoop to the pop-riveted front splitter, is just perfect. Sod buying it as a motoring icon, pop it in a gallery and call it art.

When Lotus launched the Exige back in the year 2000 it was received with rapturous words from our then co-editor Richard Meaden (evo 023). The 1.8-litre K-series engine came in two specifications: basic 177bhp form or the more desirable 192bhp VHPD (Very High Performance Derivative). Weight was a scarcely believable 780kg and Lotus claimed that once you were travelling at 100mph the air flowing over the wings and bodywork would push the car earthwards to the tune of 100kg.

The going rate for a Series 1 Exige is about £17K now (with the obvious variances for spec) and for something with genuine supercar presence that is beyond good value. Its curves have aged well and I think it will be the S1 rather than the edgy S2 that is treasured more fondly in years to come. All of them will have been driven on trackdays and none of them will feel like they’ve been built by Audi, but if you can’t quite stretch to a Challenge Stradale in your collection then I think the Exige would fill the ‘beautiful road-racer’ slot beautifully…

Once you’ve opened the small door and clambered over the high and wide sill, you drop into familiarly Elise-sparse surroundings, with the aluminium tub visible all around you, the Stack instruments straight ahead, and beyond them the Dino-esque view over the front wings.

The K-series fires into life as willingly as a hungover teenager, then idles lumpily. As we pull out of Goodwood’s gates and onto the road, some small stones release themselves from the tyres and clatter noisily into the arches. Pottering up to the first roundabout and then slowly following some traffic up towards the racecourse on the Downs, the Exige feels stroppy. It doesn’t want to be driven slowly; the engine chunters and splutters, the throttle sticks occasionally at low revs (a common problem) and the cold, unservoed brakes feel useless.

Then the car in front turns off, the revs climb and the engine starts breathing more and more freely until it’s blaring angrily inside the cabin and pulling hard. The steering is dancing in your hands, moving lightly but insistently with the road’s macro-level topography. It’s a strange feeling because the sensations coming through your fingertips and the way the car darts into direction changes speaks of delicacy and helium-filled inertia, yet the way the Exige wants to be driven – thrashing engine, big pressure required on the brake pedal, hardcore levels of grip – is almost brutal. It’s a moving dichotomy.

The single windscreen wiper sweeps the screen clear of rain as the nose pushes slightly wide into the next corner. Back off to transfer the weight and then instantly re-apply the throttle. There’s a touch more roll than you might expect and even a bit of oversteer on the way out as it’s slippery, but you’re already immersed and so buzzing that you’ve forgotten you’re not an endurance racer. It’s a good excuse to keep driving for hours.

What to look for Accident damage is also the most crucial thing to look for if you’re considering a Lotus Exige, says Lotus specialist Paul Matty, because the aluminium chassis cannot be repaired and replacing it is almost uneconomical. Many Exiges will have been used on track, so make sure the undertrays aren’t hiding anything. These cars respond well to careful treatment, such as being warmed up considerately and having suspension alignment checked regularly. Their reputation for blowing head gaskets is undeserved, says Matty – check the coolant level regularly and ensure there are no leaks and all should be fine. Other than that, while parts do wear, particularly in the suspension, nothing is horrendously expensive.