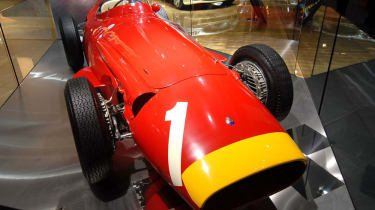 Finally, the seemingly rhetorical question of what's the greatest racing car has been answered. After many cars being nominated recently by famous motor racing drivers and personalities including Brian Redman, Damon Hill, Derek Bell, Carroll Shelby and Andy Wallace, The Maserati 250F has triumphed and been voted the greatest racing car ever.

It was elected by Sir Stirling Moss, who commented: 'I have great affection for the 250F because it was the car that gave me my first proper break in Formula 1.' Now 79, Moss is one of the best-known racers of all- time. He won 194 of the 497 races he entered, including 16 Formula One Grand Prix titles in ‘One of the most beautiful, progressive and forgiving of racing cars to drive.’

Andrea Antonnicola, the Managing Director of Maserati GB Ltd, said: 'The 250F is possibly the most iconic car in the history of Maserati, a masterpiece of engineering which won the company the ultimate motorsport accolade, the Formula One Championship.’

Parked outside the Royal Automobile Club in stunning red, the 250F delighted Ben Cussons, Motoring Committee Chairman of the RAC, 'The Maserati 250F combines the very best in both automotive design and racing car engineering of the era. Its style and appeal are timeless.'

At the helm of the 250F and thundering into Pall Mall was Nick Mason of Pink Floyd. According to him, ‘the accolade is well deserved. To many the 250F is the archetypal Grand Prix car.’ Appealing, charming and conjuring fond memories, deciding the great accolade of ‘greatest racing car ever’ for Maserati’s 250F is certainly justified. Just as Pink Floyd’s 1987 album states, it certainly wasn't ‘a momentary lapse of reason.’

The award was organised by our sister publication Octane. 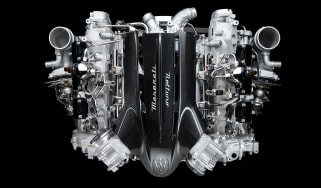