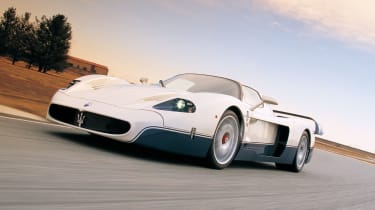 A kissing cousin to the Ferrari Enzo and costing over half a million pounds when it was new, the 621bhp Maserati MC12 certainly put some vim and supercar credibility back into the famous brand.

Built on the Enzo platform, the Maserati’s external dimensions were significantly larger in every direction but achieved a lower drag coefficient and, thanks to its carbon construction, it weighed just 1335kg. Despite its Group C racer stylings, it wasn’t an intimidating car to drive. And it was surprisingly refined, too.

Yes, you could hear its big V12 working hard, but the word you’d use to describe it was ‘restrained’ rather than ‘raw’. But for the fact that its luggage capacity amounted to whatever you could stuff into your pockets, it would have made a fine long-distance travelling companion.

All right, there was no stereo and some of the race-car hardware was barely disguised: the exposed roll-over bar, the black-painted bulkhead behind the seats. But the fundamentals were spot on. It was easy to get properly positioned behind the wheel in a superbly supportive seat, the controls were well positioned and the relatively upright, slightly bowed A-pillars made it easy to see out and accurately position the car. It was a supercar in which you could knock over Maidstone to Maranello in a day and not feel unduly shattered. If you could take in a circuit or two, so much the better.

That, after all, was its raison d’etre – to compete in the FIA GT Championship. The MC12 marked Maserati’s return to racing after 37 years and it did this with notable success. GT1 MC12s began competing towards the end of 2004 and were soon scoring podium finishes, winning the manufacturers’ cup in 2005. For the road, a production run of 30 cars was undertaken in 2004, with a further 25 rolling off the line the following year.