The Maserati GranTurismo MC Stradale has been updated, and is now available with four seats 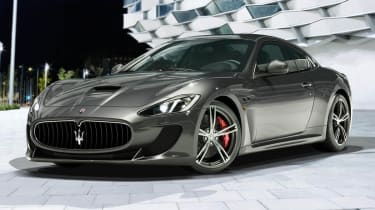 Maserati will unveil a new four-seat version of its most hardcore GranTurismo, the MC Stradale, at the 2013 Geneva motor show. Like the two-seat version, the new MC Stradale is inspired by the racers from the Maserati Trofeo one-make Championship, offering a more focused driving experience than the standard GranTurismo. The MC Stradale now features a carbonfibre bonnet with central air intake and new 20in forged alloy wheels. Under the skin, Maserati’s newer, 454bhp 4.7-litre V8 (which is now standard across the GranTurismo range) is mated to an MC Race Shift six-speed robotised manual gearbox. With 10bhp more than the original, two-seat MC Stradale, the updated car benefits from a slightly higher 188mph top speed. Helping the MC Stradale haul itself to a stop from these speeds are Brembo carbon-ceramic brakes. No prices have yet been announced, but around £115,000 is likely, putting the MC Stradale firmly in Bentley Continental GT and Aston Martin DB9 territory.

See the Maserati MC Stradale in action in our video review below...