It’s out with the old, in with the new as the final GranTurismo paves the way for Maserati’s ambitious electrified future 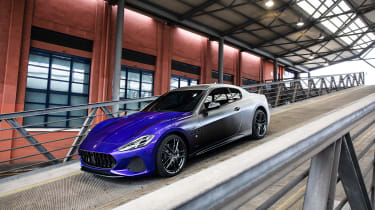 Maserati has said goodbye to its current-generation GranTurismo and GranCabrio models this week with the one-off Zéda, signalling the end of an era for the Italian luxury brand. But the GranTurismo isn’t dead, instead its successor will be just one part of a massive product push that will see Maserati act not only as FCA’s flagship luxury and performance brand, but also that of the wider alliance with PSA moving into the next decade.

The GranTurismo was initially released back in 2007, building on the success of the contemporary Quattroporte with a sleek, Pininfarina-designed two-door coupe body complemented by a naturally aspirated 4.3-litre Ferrari-built F136 V8 engine. That basic combination has not changed over the GranTurismo’s 12-year production run, finding its end as an elegant, if outclassed grand tourer.

This final unit, called the Zéda, features a distinctive paint finish to signal the end of the model run, but more importantly corresponds with the closure of the GranTurismo manufacturing line, which is now in the process of being updated to facilitate Maserati’s next generation, which is looking very bright indeed.

That’s because unlike Alfa Romeo’s thwarted performance car plans, Maserati’s future is looking more positive, with a bold plan to not only replace the GranTurismo in 2021, but also finally realise the Alfieri sports car next year, and spread fully electrified powertrains across a revitalised range going into 2022.

This is part of FCA’s €6billion (£5.1bn) investment into its Italian business, which will focus on production, electrification and autonomous technologies. Maserati’s role in the investment plan will focus on three initial phases, lead by a drive in developing the brand’s electrified powertrains. We’ll see the first fruits of this investment next year when Maserati releases its first hybrid-powered model, confirmed to be a Ghibli hybrid. Soon after, a production version of the Alfieri Concept will arrive, manufactured on the refurbished GranTurismo line.

After this, a second smaller SUV model is due to arrive to sit alongside the Levante, with pre-series models expected to roll off a new production line in 2021. The next-generation GranTurismo will then arrive later that year, with the GranCabrio to follow in 2022.

A highly profitable customer personalisation programme will also be implemented in the same vein as Lamborghini’s Ad Personam or Ferrari’s Tailor Made services. On top of offering customers greater choice with one-off paint and leather options, the programme is also very useful at bumping up a model’s profitability per unit, with as many as 40 per cent of all production from companies such as Lamborghini going through this type of personalisation process.

These new technologies and programmes will also integrate themselves within the current Ghibli, Levante and Quattroporte model lines, helping to breathe some life into what many consider to be a deeply undernourished brand within the FCA portfolio.