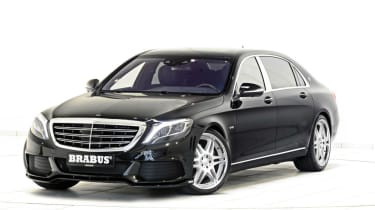 Yesterday we brought you the Audi S8 Plus, a two-ton car that can accelerate to 62mph faster than the first-gen R8 V8. But today, we bring you the Brabus Mercedes-Maybach, a super-heavyweight based on the S 600 that can accelerate so fast that it seems to defy the laws of physics.

Despite weighing 2.8-tons, the luxury saloon takes just 3.7sec to reach 62mph, and it’ll keep on accelerating until it reaches a 217mph top speed. Those are Pagani Zonda F-worrying numbers in a car that weighs almost 700kg more than a Range Rover.

This gargantuan performance comes thanks to a monumental powerplant. Brabus has extensively modified the Mercedes-Maybach S 600’s twin-turbo 12-cylinder engine, upping its cubic capacity from 6-litres to 6.3 by adding a custom billet crankshaft with a longer stroke, boring out the cylinders, and fitting forged pistons and precision-balanced connecting rods. 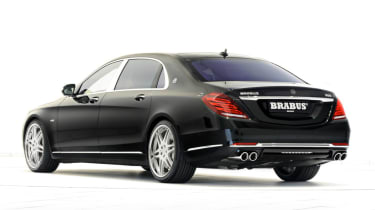 Brabus also ditched the original turbos for new items with a larger compressor unit and larger turbine, added freer-flowing intakes with gold heat reflection sheathing, a new exhaust manifold and bigger bore down pipes - and the ECU has been remapped to make best use of these changes.

The results have seen peak power increase to 887bhp and torque to 1106lb ft - a growth of 364bhp and 494lb ft respectively. This ensures a power-to-weight ratio of 322bhp/ton, which, to put things into perspective, is just 1bhp/ton shy of the Ford Mustang Shelby GT350 R. 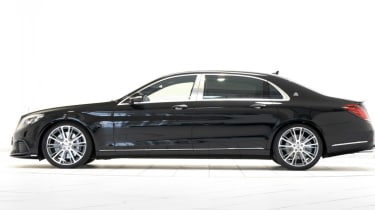 Of course, to handle this considerable growth in output, Brabus has developed special settings for the car’s Magic Body Control air-suspension. It lowers the car’s ride height by 25 millimetres, and rather boldly, is claimed to leave ride quality unaffected. The car also sits on new, 21-inch wheels – there’s a choice of Monoblock VI evo or Monoblock R Platinum Edition designs – wrapped in Continental, Pirelli or Yokohama rubber of 255mm front and 295mm rear widths.

For the car's exterior, Brabus has developed what it calls ‘aerodynamic-enhancement’ components in the wind tunnel. Eagle-eyed spotters might notice the new bumpers, front spoiler, larger air intakes and integrated rear diffuser. But to most, the Brabus remains remarkably understated – not that a 5.4-metre long car would easily go unnoticed. 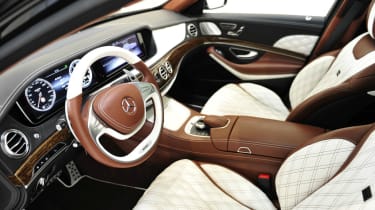 In the cabin, Brabus’ in-house upholstery shop can create an almost unlimited number of leather interiors, with more materials including Alcantara also available. Essentially, if you can afford it, Brabus will make it. To keep its wealthy passengers entertained, an iBusiness infotainment system is included, utilising Apple software to provide internet access, video and audio.