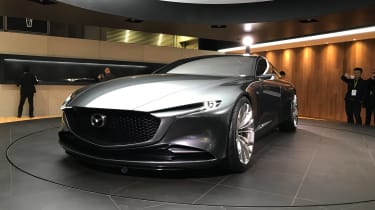 Two years ago Mazda revealed the show-stopping RX-Vision concept at the Tokyo motor show. An unashamed homage to the much-loved RX-7 coupe, the RX-Vision’s task of previewing the future of Mazda design was a resolute success. Now in 2017, Mazda has revealed the next step with this new, svelte Vision Coupe Concept.

In the very contemporary form of a four-door coupe, the Vision Concept is another look ahead at Mazda’s next generation Kodo design language. Not previewing a specific production model, we should see elements from the Vision Coupe eventually trickle down into future products like the next Mazda 6.

Like the RX-Vision, this concept’s biggest change from Mazda’s current style is a new surfacing technique. Moving on from the current, organic aesthetic, Kodo 2.0 has a more technical feel, instilling an almost grained structure to the surface, which bucks and weaves between concave and convex surfaces. Mazda’s designers have paid close attention to the surface movement, purposely shaping highlights through the bodywork’s contortions. 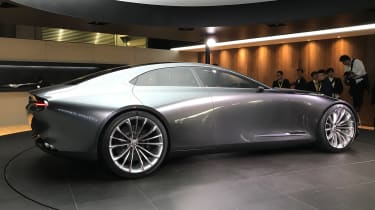 The overall effect is incredibly sleek and sophisticated, looking typically Japanese thanks to a degree of restraint, yet perfectly inhabiting its indulgent proportions. The nose, although obviously connected to current Mazda product like the new CX-5, has a more intricate look, integrating elements like the lighting units into voids within the sheet metal rather than being pasted onto the bodywork.

The window silhouette is lean, with only a slight kick at the rearmost junction, adding just a touch more visual volume over the rear wheels. Further towards the rear, Mazda has sharpened up the mass by creating a defined shoulder line blending softly into a tapered rear.

> Click here for more on the Mazda Kai Concept

Like the headlights, the rear lights also sit within a void, here contrasting against the bold, round surfaces with a Lotus Elise-like reverse scallop across the rear fascia. Unlike a growing number of saloon-type cars, Mazda has resisted the temptation to apply heavy ground-works, instead tucking the rear valance right in, visually reducing the mass behind the rear wheels to balance out the slim glazing. Mazda call the design ‘beautifully restrained, with nothing overemphasised’, an apt description. 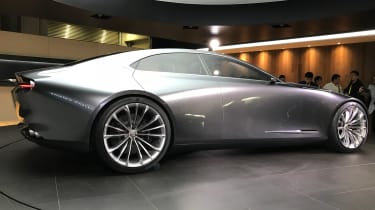 Inside, Mazda’s design restraint continues, featuring the now trademark triple dials, sitting atop a more architectural dash. With shades of Lexus LC coupe and Alfa Romeo Giulia evident in the driver-focused cowling and hidden infotainment screens, the interior perhaps lacks the originality of the exterior.

Mazda has yet to release any technical details (if there are any), but as seen in the images, we suspect it might feature a next generation Skyactive-X petrol engine due to the centrally mounted rev counter showing a 6500rpm redline.

In the unenviable position as one of the few remaining truly independent car manufacturers, Mazda has had to constantly redefine its place within the mainstream since breaking away from Ford at the beginning of the last decade. Thanks to shrewd component sharing and a definite aesthetic and dynamic thread through different model lines (without resorting to repetitiveness) Mazda looks to have furrowed through the challenges to become one of the few manufacturers left with any real sense of individuality.