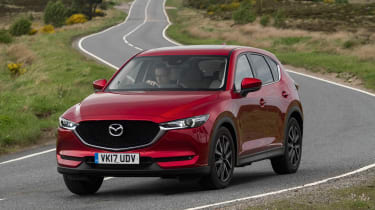 Since its launch in 2012, the Mazda CX-5 has offered a blend of engaging handling, neat hatchback-like styling and a practical interior. It may have been a mainstream, high-riding compact SUV, but it proved there could be an element of driving fun in ordinary 4x4s.

The latest model, launched five years after the original, sticks to the same winning formula. The proportions and detailing will be familiar to owners of the old model, but its bolder, sharper and marginally more aggressive design makes it one of the tidiest and handsome SUVs on the road.

It’s a similar story inside. To give it a more premium feel than its direct rivals from Nissan and Ford, there’s a greater use of soft-touch plastics and brushed-metal trim. However, while that means the cabin feels more upmarket, it’s barely any bigger than before. This means that when it comes to practicality, the CX-5 is class competitive rather than class leading – buyers looking to edge ahead in the space race should look to the Skoda Kodiaq, instead. 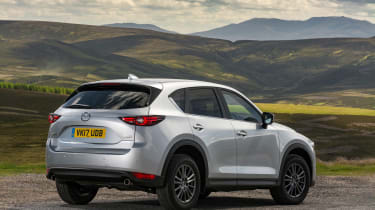 Performance and 0-60 time summary – The CX-5 isn’t likely to win any races, but that’s not really the point of it anyway

Engine and gearbox summary – Mazda’s attempts to improve its SUV’s 2.2-litre diesel engine have made the CX-5 a refined and pleasant drive

MPG and running costs summary – With its tall body and high ground clearance, the CX-5 doesn’t have the best start in terms of economy, but it still performs well

Interior and tech summary – There’s nothing dramatic or surprising inside the CX-5, but it's simple, well laid-out and its infotainment system is a doddle to use

Prices for the Mazda start at £24,895. For that you get the entry-level front-wheel drive, manual, petrol version, while the 2.2 D 175 AWD Sport Nav automatic – the most expensive CX-5 – costs £34,595. That looks a little costly until you consider that a similarly equipped VW Tiguan 2.0 TDI 190 4Motion will set you back a not inconsiderable £37,415. By contrast, the more practical seven-seat Skoda Kodiaq 2.0 TDI SE L undercuts the VW, but that matches the Mazda at £34,470. And while the Skoda is not quite as engaging to drive, it’s close enough that some will sacrifice the sliver of extra satisfaction behind the wheel for the increase in space.

Seat’s Ateca is probably the only other small, affordable SUV that can rival the Mazda for driving enjoyment. Prices for the Ateca start at an incredibly low £18,675, but it doesn’t take long before it becomes an over £30,000 car when you start adding four-wheel drive, a diesel engine and an auto gearbox.