More than 100bhp per litre for Mazda’s roadster 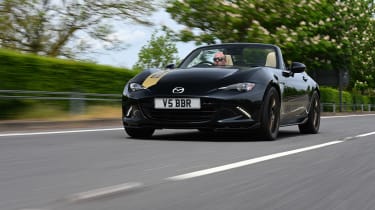 When Mazda launched its more powerful 181bhp MX-5 late last year it finally seemed to answer calls from those wishing for more power from the perennially popular but often modestly powered roadster.

That doesn’t mean there isn’t still room for more though, and Brackley-based BBR has long been a master at extracting extra horsepower from each generation of MX-5. Even increasingly advanced Skyactiv technology hasn’t stopped it, and BBR’s latest packages offer 200- and 220-horsepower upgrades for the 2-litre car.

BBR says it’s the first time it’s been able to breach the 100bhp/litre mark without changing the engine internals on an MX-5, while only small internal changes are required for the Super 220 package with its 110bhp/litre figure.

On BBR’s dyno that’s good for 202bhp at 7300rpm (an improvement of 21bhp on paper, or 18bhp above BBR’s 185bhp figure for a standard 2-litre car), and 165lb ft of torque at 3950rpm, 10lb ft lower than a dyno-recorded standard car and developed 900rpm lower. That offers improvements in both driveability and performance, as well as improved throttle response.

The Super 220 package goes a step further, featuring all the components included in the Super 200 kit, but with the addition of high-performance camshafts, valve springs and retainers, all to BBR’s own specification. 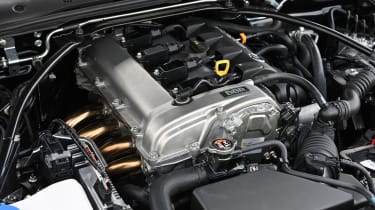 A 2.5-inch exhaust system (with a choice of silencers) is optionally available, as is a four-into-one manifold with a high-flow catalytic converter. Twelve to 36-month warranties are also available, while the kits remain MOT emissions compliant. And of course, turbocharger packages are also still available for both 1.5 and 2-litre engines.