Until Mazda develops a new MPS model there's little of interest in the range when it comes to straight line performance, but against conventional mass-market rivals the Mazda3 fares well enough. It could be better, but for kerb weights that start from 1351kg - a good hundred kilograms heavier than basic models in several other manufacturers' ranges.

The slowest model is powered by the 1.5-litre petrol engine and though it never feels particularly tardy, its 10.8-second time for the 0-62mph sprint tells a story, one that involves just 99bhp and 111lb ft of torque. That engine isn't offered in the Fastback model.

The 118bhp variant of the 2.0-litre petrol engine is much quicker, at 8.9 seconds, but you need to use all of the rev counter to achieve that and the coarse engine note doesn't encourage such antics. It's considerably slower when paired with an automatic transmission too, posting a 10.4-second time. The Fastback can be had with that engine, and it's actually a tenth faster to 62mph for both transmissions, but it's the least impressive powertrain of the lot. 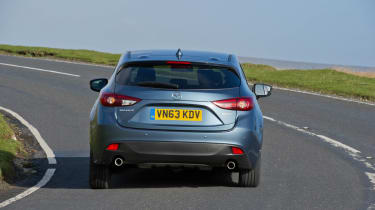 Mazda also offers a 163bhp version of the 2.0-litre petrol engine, which is more appealing at the top end than the lower-powered unit. It achieves a respectable 8.1-second 0-62mph time, but it has no more torque than the 118bhp unit so it too needs revs to get a wriggle on.

In contrast, the torquey 2.2-litre diesel effortlessly puts in an 8.1-second time and matches the petrol unit's 130mph top speed (eight seconds dead and 132mph for the Fastback) and in reality, for most drivers, it will be far quicker than the petrol units for more of the time, as it has a usable mid-range obviating the need for revs. That's just as well, as the diesel isn't as quiet as some rival powerplants. Its performance more than makes up for that though.