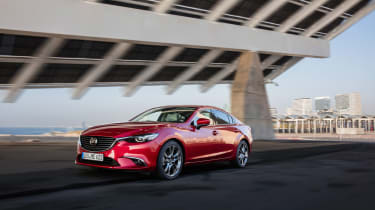 Technology improvements and better refinement are among the changes Mazda has made to the Mazda6 saloon and Tourer when they hit dealerships later this year.

Most significant is the introduction of a system Mazda calls G-Vectoring Control, or GVC. Part of the company’s Skyactiv-Vehicle Dynamics technologies, GVC uses electronic systems in the engine, transmission and chassis to vary torque to the wheels.

While such systems would usually be used to enhance traction on corner exit, GVC improves turn-in and stability in both corners and on straight roads. Using feedback from the steering and throttle positions, the system can reduce torque to the front wheels as the driver turns, transferring weight to the front axle for greater turn-in grip.

On straighter roads, it can also nibble away at power just enough to reduce necessary steering corrections due to the road surface.

While this is available across the range, diesel models in particular also enjoy two significant technological updates. The first is Transient Control, a system that is said to improve throttle response. 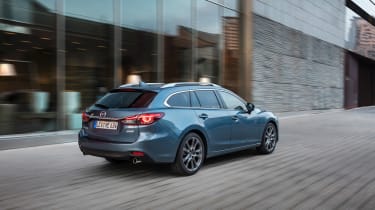 The second is Natural Sound Smoother technology, which uses a dynamic damper between each piston and connecting rod to mitigate the effects of typical diesel vibrations. In addition, Mazda has thrown more sound damping material into the cabin and tightened up the panels and door seals to further muffle unpleasant sounds.

Unchanged are the engines, which means a pair of 2-litre Skyactiv petrol units in 145PS and 165PS outputs, and a duo of diesels, both 2.2 litres in capacity and developing 150PS and 175PS respectively. Mazda says 75 per cent of Mazda6 UK sales are diesel, hence the focused improvements. Pricing, like the engines, remains the same – starting with a 2-litre saloon in SE trim for £19,795.

A new exterior colour is also available: Machine Grey Metallic. You’ll be most familiar with this deep metallic grey shade for being the colour in which the Mazda MX-5 RF was launched. The new models will be available from the autumn.